Major changes going on in the Lutz household lately. Here are a few:
The good news is that we are on the cusp of autumn. And tonight I was finally able to bring some heat into the kitchen: I made risotto. Lemon risotto, specifically. A montage: 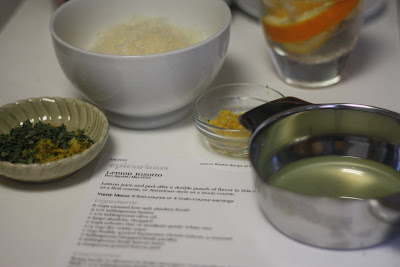 As with any recipe, I always recommend getting all ingredients ready ahead of time. (Ignore the oranges in the glass - that was my Lillet on ice) 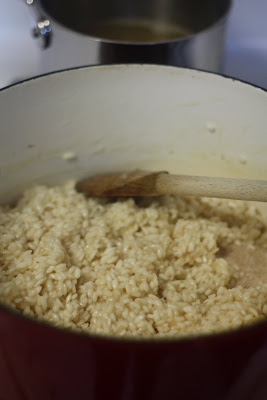 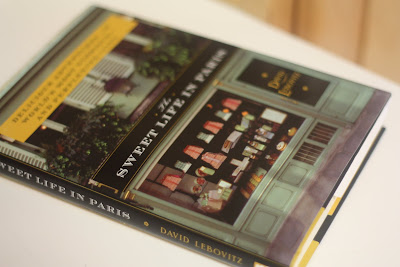 The thing I love most about risotto is that I can stand there, stirring and stirring, and read. It must've been something unconscious because I "accidentally" left my e-reader full of manuscripts at work on Friday. Which left me free to read David Lebovitz's The Sweet Life in Paris all weekend which, suffice to say, did not quell my wanderlust. It's lovely in every way (the book, that is. Not my wanderlust, which is rather annoying and expensive). 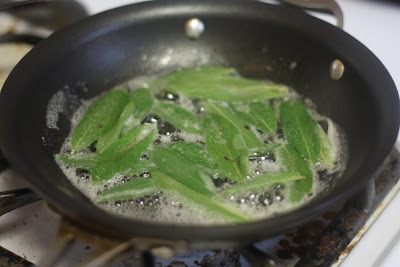 Reference the recipe I linked to above, which I followed almost exactly. However, I didn't have a full two tablespoons of parsley or basil left on my balcony garden. I did have a bunch of sage in my fridge that was about to go bad. So I used 1 tbsp. chopped parsley and 1 tbsp. chopped sage. Then I fried whole sage leaves in 2 tbsp. of butter for garnish: 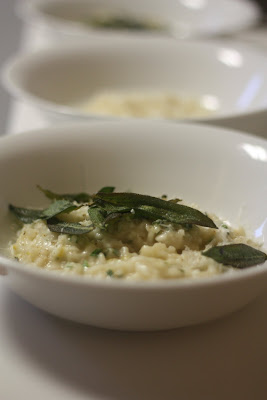 Lest you think my tastes are too rich (or fattening) for your blood, I didn't add the the butter at the end that the recipe recommended: I figured the butter I used for the fried sage sufficed.
Adam came into the kitchen while I was stirring and reading. He put his arms around me (as all significant others should while someone is cooking an amazing dinner from which they will benefit) and he said, "I could tell you needed this." "Needed what?" I asked. "Needed to just sit in the kitchen with your music playing, stirring. Reading. Glass of wine." And he was right. 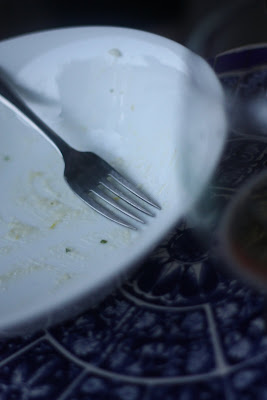 Eat, drink, and feel grounded in the kitchen.
Note: In the great Beer vs. Wine battle that goes on in our house, we decided that tonight was a draw. We agreed that the Hermann J. Wiemer 2008 Dry Riesling was exceptional, as was Adam's Bear Republic Racer 5 IPA.
Posted by Unknown at 6.9.10

Since you asked us to weigh in: I highly recommend Costa Rica. It is unbelievably gorgeous and there are a lot of unique things to see and do. Volcanoes, sunsets, jungles, caves, beaches... (although, factor in your tolerance for physical discomfort. It is very, very humid).

I have heard amazing things about Costa Rica and would love to go there, but I also want to make a little plug for SE Asia. I think that Thailand is such a great place and you can get the hustle and bustle of a big international city plus the serenity and unbelievable beauty of the beaches.

Wherever you go, it will be amazing for you and especially for the kiddo. Horray for travel!

"I can tell you needed this", this is exactly the kind of day/evening I need. I love reading, working at my library, gardening, but nothing relaxes me like an afternoon of cooking (chopping and sauteing preferably) and music (and a glass of wine, of course).

As for the trip, tropics would be great, but sounds like you need another trip to France.

Paris is an okay spot on the map...

I do the organic markets in a French city (southwest near Bergerac) and since I'm American, a woman who sold fruits, vegetables, homemade soups in big jars, chestnuts, etc. confided in me that she was shocked as a teenager when she went to England and found her hostess enjoying a glass of sherry while cooking dinner in the kitchen--all by herself! I thought of countless times when I'd poured a glass of wine while preparing a meal--both lunch and dinner--but didn't say so. Yes, the French are a bit conservative about enjoying alcohol alone.

But I still vote for Paris...