Not literally, of course. But I do have that head-hurting, body-aching, totally exhausted feeling after my BEA weekend. I blame the bowling. Here are the highlights: 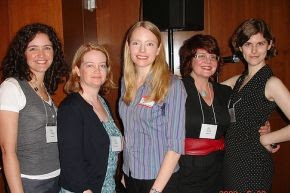 - For a short time, SLJ has a picture up of the panel I was on during the Day of Dialog. A recap of the whole day is here.
- I went to a tea with children's authors where we sat at a table with an author and/or illustrator and had the opportunity to really discuss their work on a one-on-one basis. Among the authors in attendance were Jon Scieszka, Libba Bray, Suzanne Collins, Kristin Cashore, and many others (in particular, I heard glowing reviews from Sarah Dessen's table). I was fortunate enough to sit with Christopher and Walter Dean Myers, both of whom have books coming out with Egmont USA: Riot (written in the same screenplay format as Monster) and Looking Like Me, which is the picture book illustrated by Christopher Myers. It was a fun discussion with lots of good-natured jabbing across the table between father and son, as well as some interesting conversation about identity, race, and the human experience. Riot will be released in September 2009 and Looking Like Me is available in October.
- I saw Tiger Beat with Stacy and Jenn at Books of Wonder on Friday night and they killed. Libba Bray rocked both "Superstitious" and pink tights with Converse. Yes!
- Tiger Beat event was followed by KidLit Drink Night, which was SO much busier than previous KLDNs! But I had the awesome opportunity to meet Pink Me (yes!), MotherReader, and Rebecca Stead (who I talked to for waaaaay too brief a moment!). I also hung out with well-known friends and colleagues Bethany Hegedus, Kekla Magoon, Heather Scott, Molly O'Neill , Michael Santangelo, and Melanie Hope Greenberg.
But, wait! There's more!
- I attended a reception for Egmont USA's inaugural list at Hosfelt Gallery (swanky!). However, I was feeling rather anti-social by that point so I cornered Ellen Greene and made her talk to me the whole time. There was a fab band playing and a few authors even danced. Servers also passed around goodies and there was a fantastic mushroom flatbread that Ellen and I swooned over. Overall, a lovely soiree.
- My last event was bowling at Lucky Strike Lanes with Little, Brown in celebration of Geektastic: Stories from the Nerd Herd, their analogy edited by Holly Black and Cecil Castelluci (Jenn's review). Name a major YA author and they were there: Libba Bray, Scott Westerfeld, Justine Larbalestier, David Levithan, Holly Black, Sara Zarr, Barry Lyga...and those were just the ones I recognized! I also got to hang out with two of my favorite YA librarians, Jack Martin and Chris Shoemaker. The best part? Competing with Scott Westerfeld for last place honors - it's hard to be intimidated by your favorite authors when you're bowling with them! 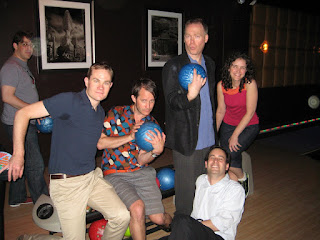 Eat, drink, and thanks to all the publishers and authors who made BEA so much fun!

Boy oh boy, though, am I EXHAUSTED! Not that I expect any sympathy from anyone... 8-)

Excellent! I'm glad that I got the chance to see you briefly at KidLit night, and then to talk to you at the Geektastic party. I'll say you looked perfectly comfortable there.