The Day Pinot Was Replaced by Porter

As most of you know, Adam is a beer guy. And he's getting more and more obsessed every day to the point where I'm certain he's going to start homebrewing in our bathtub, thanks to Sam Calagione (the head of all things Dogfish Head) putting ideas into his head. Or he's going to leave me for Sam.*

Adam is also notoriously difficult to shop for and, as such, our families have bombarded him with beer and its various accoutrements for birthdays and holidays. This includes magazine subscriptions. So Adam is reading the latest Beer Traveler and there's a list of the 150 perfect places to drink a beer. One of them is Henry's 12th Street Tavern in Portland (it's #25). So we go there for lunch a couple days ago. 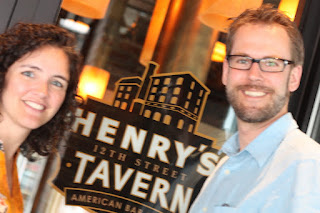 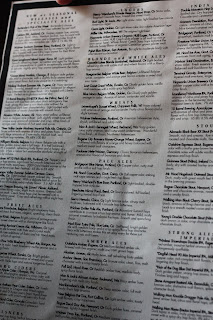 Even I found lots that I wanted to try. Like this Laurelwood Organic Tree Hugger Porter (Portland, OR): 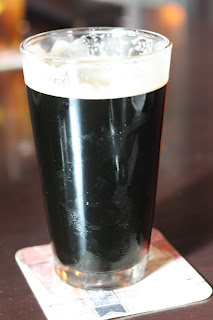 I also tried a sample of the Oakshire Amber (Eugene, OR), which I loved - it was unique and complex in its flavor.

But the STAR of the whole experience? The gorgonzola fries: 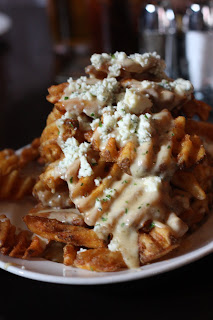 I could use all kinds of flowery language and purple prose to describe them but I just can't. Crispness: perfect. Seasoning: perfect. Amount of gorgonzola: perfect. We had one plate of these among five of us, but we could just had two plates and called that our lunch. Next time, no doubt.

The dessert wasn't half-bad either: 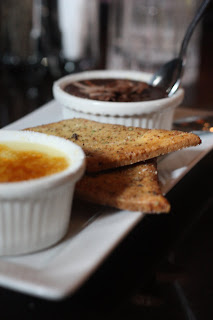 That's the creme "brewlee" sampler. They use Widmer Hefeweizen to make the one so there's lots of clove and ginger and spice in it. The chocolate one uses Black Bear XX chocolate stout (of course) and it's so rich that one bite will suffice. Shortbread finishes it out.

Our hope is that Henry's is going to become a tradition - it was fantastic.

Eat, drink, and be open-minded about beer.

*While visiting the Dogfish Head Brewpub recently, Adam actually met Sam Calagione's son who isn't much older than our Bug. Adam is thinking of arranging their marriage...
Posted by Unknown at 14.7.10

your pictures are so gorgeous that it is almost irritating. i love you. please write more. we miss you.