As mentioned, we're in the middle of a move...which means that, basically, I'm semi-permanently in Grump Mode.  Love the excitement, love the adventure, love the promise of a move.  But hate the grunt work, the physical labor, and disorganization of it all.  I realize how silly it is for me to be so grumpy so I try to keep my head above water by playing lots of fun music, drinking an extra glass of wine or two, and trying unexpected recipes (where permitted since, you know, I've packed half my kitchen).

In the midst of weeding through my magazine recipes and articles, I found this one from Saveur, "Breakfast Times Two*."  It's a short blurby article about Munich, specifically, and their traditional zweites Frühstück, or second breakfast.  After a light breakfast, there is the late morning second breakfast, which usually consists of sausage, a soft pretzel, sweet mustard, and a beer.  A beer!  At 11:00 a.m.!  I knew this would be a brilliant way to alleviate my bad attitude.  I mean, how fun and out of the ordinary! 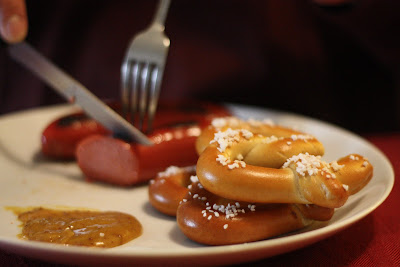 Now, I didn't have the traditional pretzel - I am so embarrassed to admit that I used those generic Super Pretzels - but, nevertheless, it was awesome.  The knackwurst we had with it was sweet, the pretzels were salty, the mustard was a tad spicy...and the beer washed it all down to perfection. 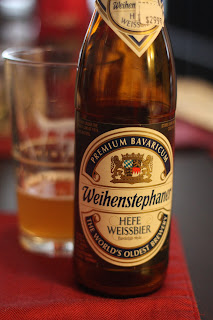 Like the photo in Saveur, we drank Schneider Weisse - first, we split a bottle of  the original Schneider Weisse, which was so light as to be almost "American lager"-esque.  Our second beer was the Weihenstephaner, which was a wheat beer with a little more heft and spice.  I liked it a bit more than the Schneider Weisse, but it was purely a personal taste issue - they were very different beers.  If you can't find either of these, you can just stick with anything German and/or wheat - you'll most likely get the spice you'll need for this.

Talking about spice and sausage aside, this is just what the doctor ordered.  We got out of our routine, Adam and I gushed about how delicious and fun it all was, and Bug got to be all shocked about us having beer at 11:00 a.m.  Lots of of laughter all around.  And you can bet that I matched the music: there's a German band that came on my radar a couple years ago, Wir sind Helden**.  They played in the background.  Overall, the whole meal was a triumph and started off my weekend just right.


* Apologies for lack of a link to the article - it's not available on Saveur's website.  For the record, the short article was in issue #114, "The Breakfast Issue."
** Never heard of Wir sind Helden?  You don't need to understand German, I assure you, to get addicted to their sound.  Check out the concert footage here and here.  Try to resist the pop sound and the adorable lead singer!
Posted by Unknown at 13.2.11