First, I want to state that I did not get through the Leek Soup recalibration: I had a small lunch yesterday.  I just couldn't do it.  I had a leek for breakfast, lots of water...and I felt punch-drunk and off-balance all morning.  Then I got a headache.  Then I couldn't stay hydrated enough.  I got to lunch and thought, "This is craziness.  I feel like I'm on Valium."  For the record, I took Valium when I had a root canal and hated it immensely (both the Valium and the root canal).  So I ate lunch.  No worries.  Clearly, it wasn't for me.  I do still feel like it got me jump-started so that's a good thing.  So for those of you who are trying the recalibration: please listen to  your body and eat if you need to!

So some French words of wisdom for today, quoted from FRENCH WOMEN DON'T GET FAT:


Eat only at the table, only sitting down.  Never eat out of cartons.  Use real plates and decent napkins, if you have them, to emphasize the seriousness of the activity.  Eat slowly, chew properly [...] Do not watch television or read the paper.  Think only about what you are eating, smelling, and savoring every bite.  Practice putting down your utensils between every few bites, describing to yourself the flavors and textures in your mouth. (Don't let anyone mock you for acting like a French woman - you will laugh last!)

This is an important passage because it really does redefine the way you eat each meal, at least it did for me.  And I especially appreciate the reminder about people mocking you - I felt ridiculous when I first started eating this way but, ultimately, it became part of my eating ritual (which I'm trying now to reclaim).  You'll feel silly at first but, when you eat better, feel better, and look better, it'll be easy to eat with a knowing smile on your face (yes, I totally had the Mona Lisa in mind when I wrote that...).

So, portion control.  In Mireille Guiliano's follow-up to FWDGF, FRENCH WOMEN FOR ALL SEASONS, she shares the 50% Rule.  I'm paraphrasing but the idea is that you mentally cut your plate in half.  Eat half your meal, mindfully, savoring.  Then stop.  Utensils down.  Evaluate your satisfaction level.  Are you satisfied with what you ate?  Are you finished?  Or are you genuinely still hungry?  If so, then have half of the half that's left.  Then evaluate.  And so on.

One example of exercising portion control is my dinner just last night.  Adam and I had "adult dinner": Lemon-Herb Steak with Warm Potato Salad.  See?  Don't you love being French?  Does that sound like a diet?  Anyway!  I plated our dinner but, before taking it to the table, I asked Adam, "Do we really need all this food on our plates?"  We both looked and Adam said, "I think you can definitely pull enough off to have a nice lunch tomorrow."  He was absolutely right.  So I took a bit off each of our plates, and guess who gets to  have steak and potatoes for lunch?  This gal!  And we ended up eating a little bit less than we might have otherwise!  The key is to really engage your mind in everything you're consuming, especially at the beginning.  Eventually, it'll become intuitive and routine.

Another example is my breakfast this morning: 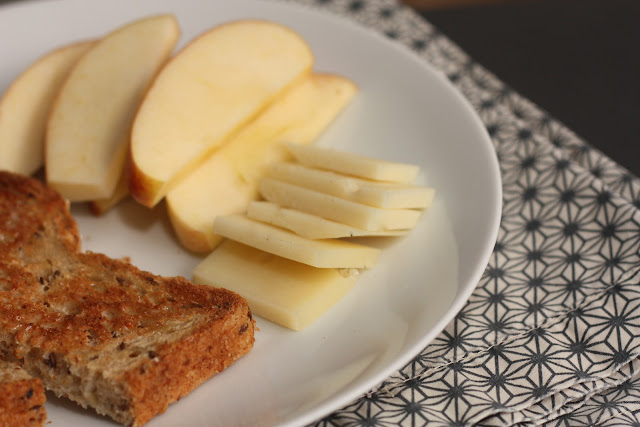 Apple slices, Idiazabal cheese slices, and whole wheat toast with about a 1/2 teaspoon of butter.  This is about half of what I have been consuming lately.  I normally have a whole apple - this was a half.  I have the same number of cheese slices but I cut them much thinner than usual today.  And I normally put a full teaspoon of butter on my toast.  But I felt no less satisfied this morning.  In fact, I felt downright virtuous and content.

The other idea that Mireille Guiliano talks about is tricking yourself.  I tricked myself with the cheese slices.  Because I had the same number of slices, I didn't feel like I cut down at all - they were just thinner.  The butter?  Didn't miss the other half because my mind was still telling me, "Mmm...butter!"  I also cut my toast in two - it made me feel like I was having more than I was...and it also helped me remember the 50% Rule - I only ate 3/4ths of my toast!

Additionally, my weakness - my "offenders" - is anything salty and crunchy.  I fooled myself with this meal.  The apples and toast were crunchy, and the cheese and butter were slightly salty.  I got to satisfy my jones without downing half a bag of pretzels.  And I got so much more genuine pleasure out of this.

Lastly, Mireille Guiliano, in Chapter 4, talks about her colleague who has nothing but OJ, sugar-laden coffee, and two biscotti for breakfast: pure sugar!  Eventually, this woman starts eating breakfasts similar to mine today.  About this, Guiliano says: "[...] she was seeing breakfast now not as a sugar-charged jump start, but as a ritual of self-pampering; it put her in a sunnier mood to face the day."  I love that.  Couldn't we all use a little more pampering?  And why shouldn't we turn our breakfast into a lovely ritual of being kind and gentle to our minds and bodies?

Eat, drink, and pamper yourself!