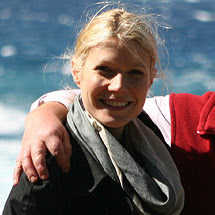 I feel weird admitting this but I have ambivalent feelings about Gwyneth Paltrow. I saw her in Sliding Doors first, then Shakespeare in Love (with a small detour at Moonlight and Valentino - LOVED the scene where she's playing air drums!)...and decided that if I were to look like anyone else but me, I'd want to look like her. And there's a little of the WWGD feeling in me: What Would Gwyneth Do? She's impeccably groomed, well-spoken, engaging, glamorous, fashionable...so how would I react to a situation if I were as seemingly pulled-together and self-possessed as Gwyn?
Then I saw Spain...On the Road Again with Gwyneth, Mario Batali, Mark Bittman, and Claudia Bassols and only adored her more. I mean, BFFs with Michael Stipe?! Those big sunglasses and pashminas?! Yes, please.
Then GOOP happened. And I got pissed off. Why? Because I have real issues with celebrities who try to claim "I'm just an ordinary person." That attempt to make us believe that they're just like us little people. Um, no, you're not. I could go on a rampage here, but I'm certain I don't need to - you know what I'm getting at. Long rant short: no, you're not like me. And until you're in my shoes, stop proclaiming to be. I totally felt like Gwyneth went there.
So I cook recipes from Spain...A Culinary Road Trip with ambivalence these days. Like tonight. I was desperate for something to cook tonight and ultimately turned to Spain. And I found it: Pan Con Tomate and Catalan-Style Spinach. With a side of jamon Serrano? Yes, please. This is what happened: 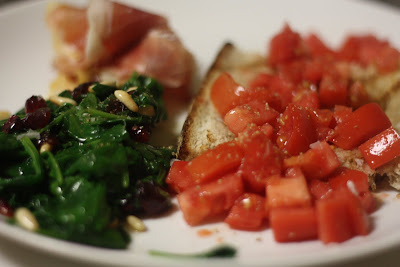 It was heaven. Exactly what I asked for. Simple and easy to make, but the flavors were gorgeous and refreshing. Unbeknownst to me when I planned the meal, it also straddled the changing seasons perfectly: it was comforting and warm, but still seasonal and fresh.
You'll notice that I changed up the Pan Con Tomate recipe a bit. I had plum tomatoes on hand. I split one in half and rubbed it all over the bread, like the recipe said. All kinds of pulpy juiciness all over that charred bread. But I still had two tomatoes left over. So I chopped them up and tossed them with salt, pepper, and lemon zest. Spread them over the bread. Finished with flaky salt and lots of pepper.
Also, I didn't have the dried currants that were called for in the spinach recipe so I used dried cranberries to great effect. Definitely feel free to substitute.
So, dammit, GP still wins. The score? Gwyneth: 4, Laura: 0 (reference the migas, as well as the empanadas and tortilla espanola). She and Mario make a killer cookbook and travel memoir - perhaps I should forgive her GOOP and just channel her fabulousness.
Eat, drink, and be okay with who you are...even if it's not Gwyneth.
Posted by Unknown at 11.9.10

I like her movies but her public persona is a little to "I'm so much more fab than you even as I'm pretending to be just like you."

Despite that, I subscribe to Goop. I don't always read it, but whoever is writing it does some interesting round-ups on various topics and it isn't always "my fab rich friend did x...."

I ate pan con tomate in Barcelona and will NEVER forget it! Thanks for sharing such a simple but resonant recipe!