Artichoke Crostini and the Picky Eaters who Don't Love Artichokes

We're still in post-moving mode around these parts so my dinners have remained simple affairs and I have a real easy one to share with you...

...but before I do, I want to address something that I don't think I've talked much about in the last three years of writing this blog: Picky Eaters.  Specifically, picky kids.  Bug is a Picky Eater...which my mom thinks serves me right since I was THE Pickiest Eater as a kid.  Which goes to show you that kids can grow out of it, as now I'll eat (or at least try) nearly everything.

So how do I handle my Picky Eater?  Well, first, Adam and I have 1-2 nights a week that we call Adult Dinner. I give Bug her dinner around 6:00, usually Annie's Homegrown Macaroni and Cheese with a sliced apple on the side.  Then while Adam puts her to bed and reads to her, I make our dinner.  Which is always something Bug would hate.  Our Adult Dinners keep me sane: I can be adventurous with my meals a couple times a week and I can also connect with Adam without having to worry about what Bug is (or is not) eating.

Most nights, though, we're having Family Dinners.  But I'm not living on mac n' cheese and apples!  And I am firmly against making a separate meal for kids on a nightly basis.  So what I often do is set aside a deconstructed version of our dinner for Bug.  As an example, when I made Jamie Oliver's Fifteen Christmas Salad, I took a picture of me and Adam's dish.  Bug's dish, though, was set up different.  I separated the ingredients from one another: her plate had a small pile of prosciutto slices, a small pile of orange slices, a few pieces of cheese, a couple slices of bread.  So she didn't have a different meal - it was all the same ingredients we had.  I like to think that I just plated it differently.

That was the case with these artichoke crostini.  I first read about this in Saveur's "6 Quick Preps" for artichokes.  I brushed bread slices with olive oil and then grilled them on my stovetop castiron grill.  Once grilled, I set them aside and sprinkled with flake salt and freshly ground pepper.  Then I spread each piece of bread with marscapone cheese (I leave the amount of cheese up to your own tastes).  On top of the toasts, add generously chopped jarred marinated artichoke hearts.  I finished it with a sprinkling of finely chopped Italian parsley and cut garlic chives (from my window "garden"!), flake salt, and pepper.  On the side, I tossed baby arugula with olive oil, Dijon mustard, salt and pepper. 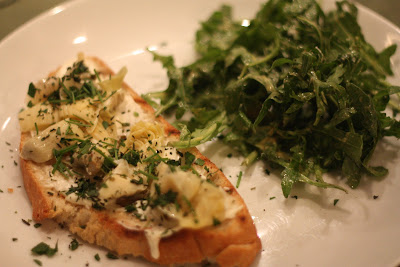 For the Picky Eater, I omitted the artichokes from the crostini so she basically got grilled bread and marscapone cheese.  Then I added a bite of artichoke on the side because the rule is that she has to at least try one bite of everything.  And she got apple slices instead of salad.

So that's how we do it in our family because a foodie parent does not a foodie kid make (even Mario Batali has publicly talked about how picky his kids are).  This meal was incredibly simple but high in flavor - exactly what I'm looking for in a weekday meal for two parents who work outside the home.  And it was "deconstructable", which is a crucial element in pleasing the entire family.

Eat, drink, and hope that my Picky Eater becomes a Foodie Adult.
Posted by Unknown at 27.3.11 6 comments:

You guys!  What took me so long to read AS ALWAYS, JULIA: THE LETTERS OF JULIA CHILD & AVIS DEVOTO?!  I bought it on a whim yesterday and, in the first 20 pages alone, I have dog-eared four pages, marked a recipe, and circled numerous parts that I've loved.  This book is heaven, absolutely heaven.

So on this dreary NYC day where winter is still hanging on (though I take comfort in the fact that it will eventually lose), I offer up this quote from Avis DeVoto (which is also a sort of recipe):

Cape Ann also provides what I stubbornly maintain are the world's best lobsters.  I also stubbornly maintain that the only real way to cook lobsters is in three to four inches of sea water, in a covered kettle, for about twelve minutes (pound and a quarter lobsters being the ideal size).  You then drape these dazzling creatures over the rocks until they cool off a bit, tear them apart with the bare hands, dip each piece in melted butter, and guzzle.  There should from two to six lobsters per person [!].  While the lobsters cook and cool off, two dry Martinis a la DeVoto should be served.  Nothing whatever else should be served - we are eating all the lobster we want, we are not fooling around with salad or strawberry shortcake or even coffee.  All you need are the martinis, plenty of lobsters, millions of paper napkins, and a view.

Emphasis and exclamation point are my own, of course.  Can you believe this?!  Ye gads.

Eat, drink, and add seaside lobster-and-martini lunch to my Life To-Do List.
Posted by Unknown at 24.3.11 No comments:

Move to Manhattan COMPLETE!  We're finally settling in and feeling close to normal - it always takes a big move for us to remember what creatures of habit we are!
Here are a few highlights from the last few weeks:
As part of our celebration, we opened a bottle of wine from our friends Amy and Lisa: a 2000 Chateau Haut-Bailly.  They brought this wine to us almost four years ago, shortly after we moved to Queens.  Amy said now was a very good time to drink it, and we thought that it was the perfect way to celebrate the new digs.  Needless to say, it was goooorgeous. 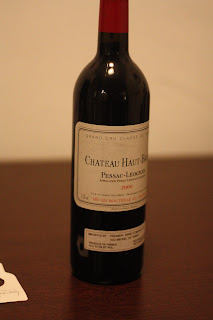 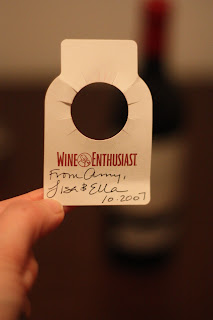 Another way to celebrate the new apartment?  A housewarming party!!!  Or, as Bug called it, "the swarming party."  Indeed it was.  About 30 people crammed into our small place?  It was cozy and our new home was indeed warmed.  We made my stand-by Red Pepper and Cannellini Dip, Chipotle and Rosemary Nuts, and Prosciutto Breadsticks (the original recipe suggests brushing the breadsticks with truffle  butter before adding the prosciutto - I highly recommend doing so).  I served a gorgeous blue cheese with Carr's Wheat Crackers as well, and I also sliced up some salami and cucumbers - which are a surprisingly delicious pair together. 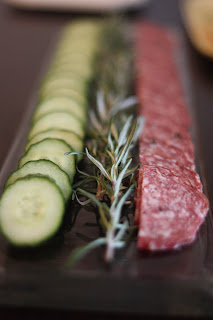 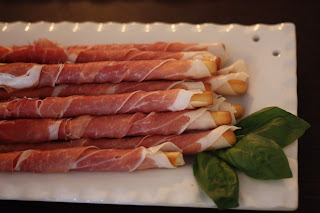 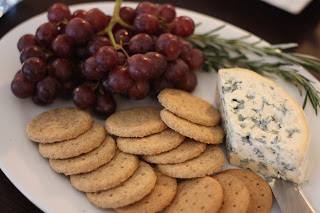 And our friend Laura brought us some lovely flowers. 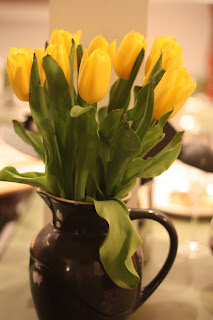 We even managed to bring back our chalkboard wall. 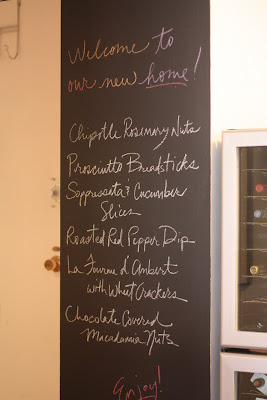 And how about those garlic chives that I was so sad to leave behind?  The night before we moved, I remembered I had left them out on the balcony so I ran outside in my pajamas and quickly transplanted them.  They're now sitting in our front window and they're in heaven: all the sun and warmth, none of the cold. 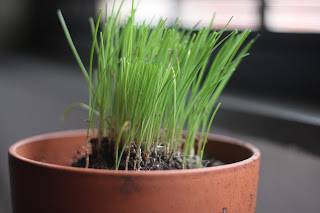 They're as happy as we are (and, as evidenced by my hack job, you can see we've already used the heck out of them).
Eat, drink, and make a new home.
Posted by Unknown at 22.3.11 5 comments: