I've mentioned pea shoot pesto here before in the briefest of passing and, for that, I'm sorry.

I'm sorry because it is one of my absolute favorite things to eat in early summer.  I tripped upon a recipe in the New York Times back in May 2009 for the pesto; it sounded delicious but I dismissed it pretty quick.  I mean, where am I going to get pea shoots?

I shouldn't have dismissed it so quickly, of course.  The next time I was at Union Square, I found a stand with pea shoots.  I approached the purveyors and mentioned the article in the Times for pea shoot pesto.  Being the smart folks they are, they had a copy of the recipe and were able to tell me the exact amount of shoots I needed.

In 2010, pea shoot pesto was a regular feature at my table. 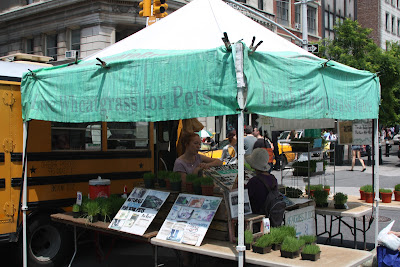 Here we are in 2011 and pea shoots are at the Union Square Greenmarket again.  Greener Pastures are the folks to talk to - you'll know them by the yellow school bus behind their stand.  They're known for their wheatgrass juice but I know them as my connection for pea shoots. 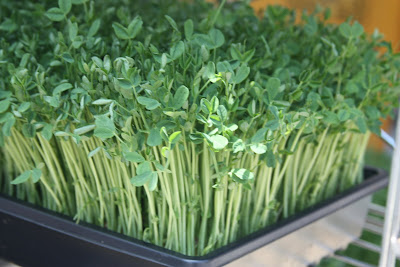 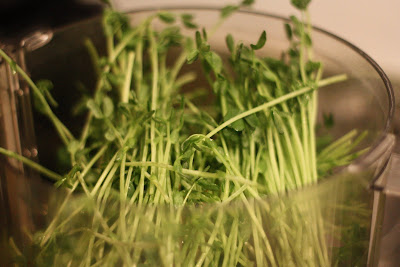 
In a small skillet over medium-low heat, toast pine nuts, tossing occasionally until golden, about 3 minutes. 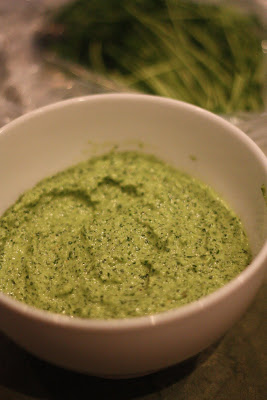 There have been a few times when I've forgotten to buy cilantro so I omitted it from the recipe; I have to admit that I didn't miss it much.  So feel free to leave it out if you're cilantro-adverse.  Likewise, last time I made this, I used fresh green garlic (instead of the dried kind you get at the supermarket) and it was incredible.  I'd recommend it always in this recipe, but it's in season for a pretty short window so you'll likely have to forge ahead with regular garlic. 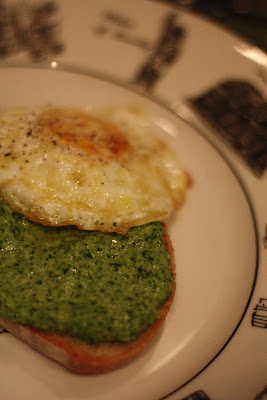 The NYT recipe pairs the pesto with pork chops, which sounds really amazing.  However, like a kid who eats all the cookie dough before making cookies, I've never gotten that far with this recipe.  I love to serve it on grilled bread (you know me and the grilled bread recipes!) with a few slivers of shaved Parmesan on top.  I also loved it with a slice of prosciutto over the pesto, and you can see in the (rather dark) photo above that I also topped it with a fried egg. Add a salad, a crisp white wine like Sauvignon Blanc, and you have a light spring or summer meal.

This sounds really delicious. I generally love pesto variants. I've never heard of pea shoot pesto before, but I know I'd love it. We can get pea sprouts year round in Australia. I love cilantro (coriander). I might need to make this soon.

Howdy Laura! this recipe made me crave your pesto, so much! and we were lucky to get peashoots in our csa box! hooray! Thanks for the post!

I just made a pesto with garlic chives and it tastes amazing. Some serious bite to it. I'll try this recipe though.

salivating over here thank you very much