Our friends Tina and Vic recently moved to Long Island City (Queens)...which we're thrilled about on multiple levels, not the least of which is that our travel time to visit them has been cut by half!  They invited us over to check out the new place, and we had a phenomenal time that included a spirited bocce tournament and outstanding street-style tacos: 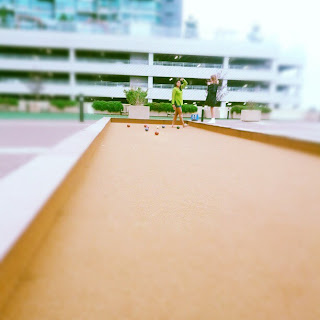 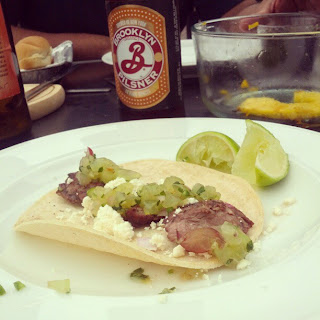 And check out the view from their place: 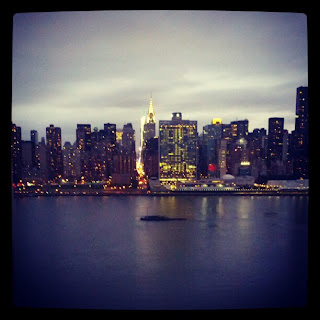 And because I can be a nosy person, I always check out the cookbooks my friends have on their shelves.  Before I could comment, though, Tina took FARMHOUSE KITCHEN FAVORITES* by Paula S. Croteau off the shelves and told me I had to borrow it from them.  I happily agreed.

Tina and Vic actually discovered the cookbook through Croteaux Vineyards, which is a Long Island winery that is a particular favorite of theirs.  Paula S. Croteau, of Croteaux Vineyards, also has her own school, Farmhouse Kitchen Cooking School; though, according to the website, classes are on hold for 2012.  As you can imagine, I am keen to get out to Long Island to visit the winery - it looks like it's a beautiful, welcoming space for tasting!

I've tried four recipes from the cookbook so far, and they have each been outstanding.  "Keepers," as Adam and I call recipes that have wowed us.  The first I want to share with you is Stuffed Croissant French Toast with Maple Blueberry Compote.  If you read the recipe and think it sounds too rich...well...you're probably right... 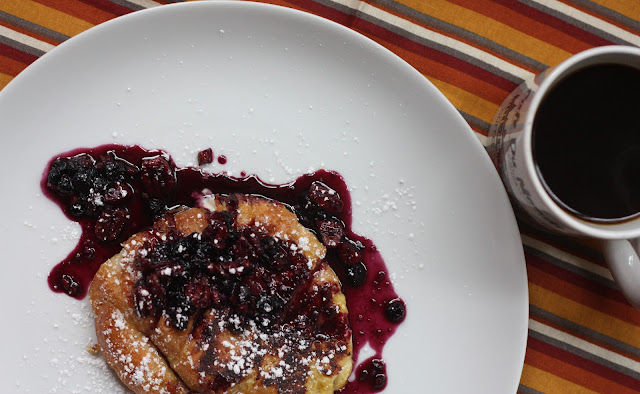 1. In a shallow dish or bowl, whisk the eggs, half & half, sugar, vanilla, and salt together.
2. Cut croissants almost completely in half.
3. Spread each croissant with 1 tablespoon of mascarpone cheese.
4. Gently soak and turn croissants in egg mixture until saturated.
5. Heat griddle or nonstick pan over medium-high heat.
6. Place the croissants on the griddle and cook until golden brown, about 2-3 minutes.
7. Gently flip and cook the second side until golden.
8. Serve immediately or cover with foil and keep warm in a 200-degree oven.
9. Sprinkle with powdered sugar or top with maple blueberry compote (actually...I did both).

1. Place the berries, syrup, cinnamon, and pecans into a small metal skillet.
2. Simmer the mixture on medium-high heat until the berries soften, about 4-5 minutes.
3. Serve with French toast or pancakes.

NOTE ON KID-FRIENDLINESS: Croteau recommends mixing fruit jam in with the cheese stuffing.  But Bug doesn't like jam, and I decided I could do without it.  And I think it worked - jam would have just been that much richer and - believe me - this thing is rich enough on its own.  Also, Bug didn't want the compote - so she just went with powdered sugar. 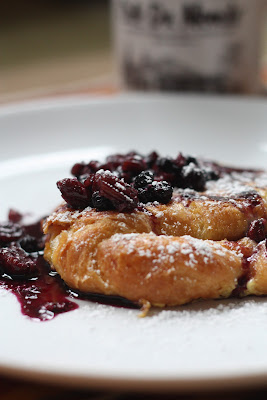 Eat, drink, and add richness to your life.

yum! and yay..just caught up on your latest posts!