"French Milk" caused my OCD to kick in!

This is as good a time as any to confess that I am often overcome with a bit of OCD. Which shouldn’t be too much of a surprise since, you know, aren’t we all afflicted with a touch of OCD from time to time? So here’s the story of my latest bout with OCD:

I was recently introduced to the blog Oops…Wrong Cookie, which has some nice reviews of books I haven’t heard of. I always appreciate reviews of more obscure (at least obscure to me) titles – it helps me keep my street cred as a “children’s materials specialist” and I just enjoy being in-the-know about such things. 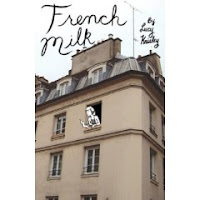 So one of the bloggers, Laura, reviewed a darling book called French Milk by Lucy Knisley, published by Epigraph Publishing (unfamiliar to me) in 2000. I’m a total Francophile so I was completely intrigued – am I the only one who had never heard of this book before? I first looked in the library catalog: no go. Hmmm… So I went to Baker & Taylor and BWI: “permanently out of stock”. Which of course is just one stop away from Outofprintsville. Damn. So I went to Amazon (guilty as charged) to see if I could pick up a copy from the Marketplace: denied there too. Hmmm… So I thought perhaps or NYPL had heard of this book and purchased it: that was a dead end too. Has this book dropped off the face of the earth?!

This is where the OCD kicks in. Now I am obsessed with finding this book. Obsessed. And this has occupied my mind for a week. I haven’t been to eBay yet so that’s my next stop. After that, I think I might have to trek into and hunt it down at the indie bookstores; they most likely won’t have it in stock but they’re more likely to hunt it down for me than my local B&N*.

Anyhoo, the hunt is on for French Milk. I will find it. Just watch me.

*This is one of those things they don’t tell you about – there isn’t a worse place to live if you want an indie bookstore. Truly. I have yet to find one at all. And even if I do find it, I will no doubt be forced to take the subway and a bus or two there. And I could be all noble and make that trek, but it most likely ain’t happening. It’s easier for me to go to Books of Wonder or McNally Robinson in than someplace in . Which brings us full circle as to the likely reason there aren’t any indies in …

i'm pretty sure the book is being reprinted soon by a larger publishing house, which should make finding it easier.
in the meantime, i have a copy (i loved it!) which you are totally welcome to borrow, should you so desire!

A little Google search has revealed Lucy Knisley's website, http://www.stoppayingattention.com/. And it looks like French Milk will be released from S&S August 2008. Woo hoo!

But yeah, Jenn, I'd love to borrow your copy! Thanks for the offer!

OCD hushed for the moment.