So remember I bought pork shoulder from Flying Pigs Farms at Union Square a couple weeks ago? About a week ago, I used it for dinner - and, oh, what a dinner it was!

When I bought the pork shoulder, Flying Pigs Farms gave me a slip of paper with some pre-printed recipes but, when it came time to actually make something, I wasn't feeling either of the recipes. So I went to my trusty old friend, Epicurious. There were a couple options, but they all called for a bone-in shoulder, which I foolishly did not get because I can't seem to choose anything under pressure and the Flying Pigs Farms guy was standing there, waiting for my decision. Anyhoo, it was too late to do anything about the bone-in issue so I looked through the recipes as if I had a bone. So I landed on Michael Chiarello's recipe for Cocoa and Spice Slow-Roasted Pork with Onions. Mostly because I had made Chiarello's cocoa spice recipe before so I already had the ingredients and knew how simple it was. Here's how it went: 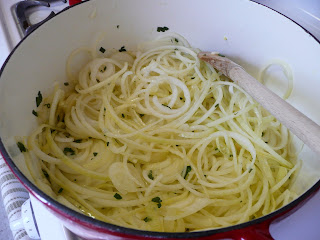 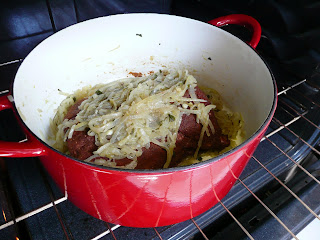 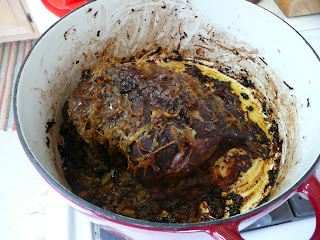 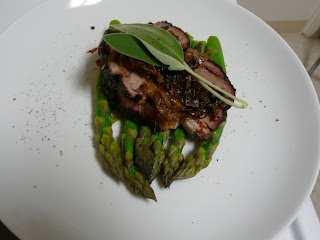 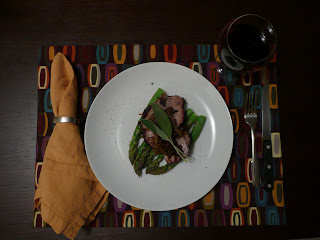 It was super easy and nothing short of delectable. I halved the recipe since Michael's recipe is for 8 servings. And since it was just us, we still had twice as much as we needed. Don't worry about that, though - a piece of the pork with some of the onions, a little honey mustard, two pieces of bread and you have one of the best sandwiches ever. The onions were amazing - I've never cooked onions before to the level where they just turn into a sauce. They're sweet and rich and they melt on your tongue. I served the asparagus with just a tad bit of butter, salt, and pepper - you really don't need a rich side dish with this one. Steamed vegetables work just fine. Michael's recipe also calls for a Sangiovese but, unfortunately, I didn't plan that far ahead so I served it with a Rioja, which paired very well with the pork.

The recipe also called for a roasting pan with a rack but my Mario Batali Le Creuset knock-off worked just swell.

I made it for "just us", but next time my parents come for a cold-weather visit I'm definitely making this. What did I do while this was cooking? Blogged...emailed...watched "Dancing with the Stars"...read a book...drank wine. I mean, once I had the pork in the oven, all I had to do was steam asparagus! SO easy!

The sad news is that this will be the last slow-roasted pork of the season because there's not a snowball's chance in hell that I'll be able to have my oven on for 6 hours at a time now that the weather has reached over 50 degrees on a regular basis. My kitchen becomes a furnace in and of itself during the summer. Come next autumn and winter, though, this will my go-to recipe. Without the asparagus, of course.
Posted by Unknown at 8.4.08

Epicurious always has tried and true recipes to fall back on. I always look at the rating to see what percentage of people would make it again. Your pork would get a high rating from me.