I've had a couple of successes lately, which is always a boost to one's ego. Especially since I've had quite a few misses, which I suppose is a sign that I'm growing confident enough to take more risks...thus creating more failures!

The weather is so deliciously wonderful here in New York, and I couldn't resist buying some Campari tomatoes at the nearby crappy grocery store the other day. The oddest thing was that the tomatoes came from Canada. Canada??? How can Canada produce such pretty jewels but I can't get anything local except for root vegetables and micro cilantro? Nevertheless, I bought the tomatoes, telling myself that buying tomatoes from Canada was better than buying them from Mexico or California - I mean, at least New York shares a border with Canada! So here' s what I made: 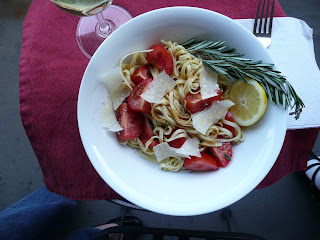 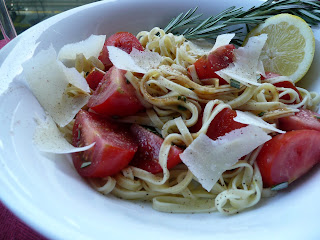 I marinated the tomatoes in olive oil, balsamic vinegar, salt, pepper, and rosemary. Then cooked up some fresh linguine. Tossed it all together, shaved some parmigiana reggiano on top, and - presto! - I had the most delicious meal on the patio to celebrate spring! And so easy!

Here's another good one: 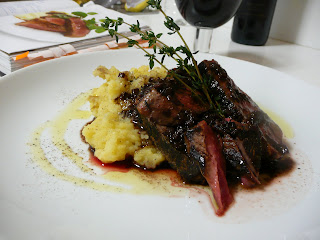 This one is from Jamie Oliver's Cook with Jamie: Pan-Fried Sirloin Steak with Simple Chianti Butter Sauce and Olive Oil Mash (you can see the cookbook picture in the background). The dish was very good, but I think it could be better - I'll keep working on it. First, I used Yukon Gold potatoes so I didn't peel the potatoes, like Jamie recommends. I actually really like the texture of the skins so I try to keep them in mashed potatoes when I can. The potatoes turned out excellent. Here is what I would change: I didn't get a very good cut of meat (thanks again, Fresh Direct). Fresh Direct only had choice cut in the antibiotics-free steak, and the lower quality cut really showed here - it didn't have that buttery, melt-in-your-mouth texture. It was too chewy. The other unfortunate thing was that I wasn't sure I would have enough sauce for both servings so I really skimped on my sauce but dumped it on Adam's plate (the picture above is Adam's). As a result, mine was a little bland and dry. Adam moaned over his serving. So I'll have to be a little less stingy with the sauce next time...or give the plate with less sauce to Adam!