Joie de vivre and all other things French 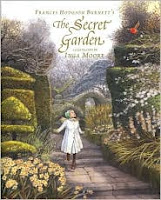 I wrote on Fuse #8 this morning that Inga Moore’s illustrated version of The Secret Garden was the best thing to see while stuck in an office on a sunny Friday.

The best thing to see is another one of Lucy Vanel’s market posts over at Lucy’s Kitchen Notebook. Today it’s La Marche de la Croix Rousse, and the photos are stunning (as usual). Lucy took a picture from the top of a hill, looking down on Lyon, and it actually makes you feel, if only for an instant, that you are in France as well. Feeling like some armchair travel today? Go visit Lucy.

This naturally fueled my fire for all things French, being a confessed Francophile. Last week, the New York Times Dining section had an interesting article, “There’ll Always Be a France, Especially in New York,” about the rebirth of old school French restaurants in NYC. For awhile it appeared that traditional French dining was dead in the city, doomed to cookie-cutter “bistros” where the same French warhorses are served year-round (steak au poivre, mussels in broth, frisée salads with lardons and poached egg, etc.). But there seems to be a resurgence of traditional, lovingly created French dishes, like cassoulet. We’ll see… My favorite part of the article, though, is when Alain Ducasse says, “[French cuisine] has never been trendy. That’s what makes it last.” 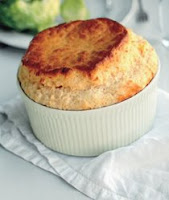 My latest issue of Bon Appètit (May 2008) is dedicated to travel, and much of that travel involves France. There’s an article, “Ten More Things We Love About France”, that lists, among other things, duck-fat fries! Did I ever post the picture of the duck-fat fries I made at home? Hmmm…I’ll find out and get back to you on that. But the best article was Molly Wizenberg’s “Cooking Life: Everyday Soufflé.” It’s a lovely article that tries to discredit the myth that soufflés are temperamental and difficult and argues that every home cook needs to have a soufflé in their repertoire. Having never tried to make a soufflé, this article completely inspired me to give it a try. I haven’t had time yet but it’s high on my list. Imagine my surprise when I called my best friend and fellow lover of all things French-related (though I speak French and she does not*) to tell her all about this soufflé thing and she nonchalantly says, “Oh, yeah. I’ve done a soufflé.” “You have?!” I asked her, incredulous. Apparently Ina Garten has a blue cheese soufflé that’s a cinch to make. Of course she does. Because Ina is not only a goddess, but the savior and inspiration for all us home cooks. Well, the home cooks I know anyway…

Last, but never least, La Tartine Gourmande has a beautifully photographed blog post up about mackerels. But since this is my French-related post, I have to point out the two phrases on her post: J’leur ai fait leur fête and J’suis cuit. I have never seen the j with the apostrophe like that before a word starting with a consonant. What is that? So I’ve written both phrases down and will have to ask my French professor next time we have class on April 28th. Unless someone can solve the mystery for me before then?

It’s such a stunningly beautiful Friday. Bon appètit, everyone!


*I only feel it necessary to point this out since she has made a soufflé and I have not.
Posted by Unknown at 18.4.08

Hello. This post is likeable, and your blog is very interesting, congratulations :-). I will add in my blogroll =). If possible gives a last there on my blog, it is about the Aluguel de Computadores, I hope you enjoy. The address is http://aluguel-de-computadores.blogspot.com. A hug.