It's Football Time: Let's Get It On

Here it is: I love football. I joined three fantasy leagues this year, two of which I have been a part of for 7 years. So today, First Football Sunday, is a big deal in our house.

The Husband and I were laughing this morning about how our “football food” has changed over the years. Five years ago, it was “Mark’s Dip,” named after the friend who introduced it to us: an entire block of Velveeta, an 8 oz. block of cream cheese, and a can of chili. Toss into Crockpot and cover until melty and saucy. Open bag of pretzels and bag of tortilla chips. Binge. While I don’t foresee myself making this concoction again in the future, I have to admit that it was some mighty fine eats.

A couple years ago, it was an adapted version of Rachael Ray's nachos: assorted organic tortilla chips, homemade cheese sauce, sautéed beef, black beans, sour cream, salsa, onions, and a ridiculous amount of cilantro. Depending on my mood, I would cut corners from Rachael’s recipe – store-bought cheese sauce and/or store-bought salsa. There was still bingeing involved…but it felt more healthful, you know?
This year…well, we feel like we definitely upped the ante. The dips? Tomato jam from Mark Bittman (also diviiiiiine on grilled skirt steak), Clotilde’s artichoke-goat cheese spread*, and Cooking Light’s roasted red pepper and cannellini bean dip. The dippables? Stacy’s Pita Chips, raw peppers, carrots, and baguette slices. Adam indulged with his Raison d’Extra Dogfish brew, and I sipped the rest of the Viognier I had with dinner last night. At 2 p.m. on a Sunday afternoon. While the Kiddo was at the park with a friend. 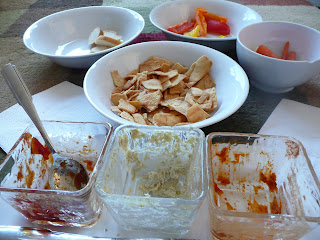 Eat, drink, and love American traditions!
* I couldn't find the recipe on Chocolate & Zucchini (I got the recipe from her cookbook).  Can anyone confirm if I can type the recipe here...or is that violating copyright?  Especially since I didn't "adapt" it - I make it exactly as Clotilde says.
Note on the photo: yep, I remembered to snap it post-munching.  Ah, well.  You can't be on top of that sort of thing all the time.