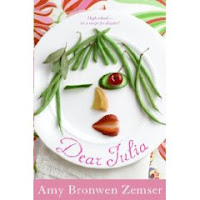 Finally!  I found my YA foodie book!  After reading A La Carte (meh) and High Dive (disqualified because it wasn’t really a foodie book), I have come to rest at Dear Julia by Amy Bronwen-Zemser.  And thank goodness!

Thanks so much for linking back to my review of this title! I enjoyed reading your take on the novel. I agree with you that it wasn't perfect, but in general it really was a fun & light read with creative cooking scenes.

Any book that has a character named after a font is automatically added to my to-read list.

I loved this book as well. The biggest problem for me was that Elaine's mother, big feminist that she supposedly is, was known as "Mrs. Hamilton" instead of going by her maiden name, or even a hyphenated name.
Shannon - Children's Library Assistant, Louisville KY

Really couldn't get into this one. I disliked Elaine so much, and even Lucida grated on my nerves. I did like A la Carte, although you are right about the food not being as central as one might expect.