I did something radical last night: I went to the store (Eli's Manhattan) to get ingredients for dinner.  And I had no idea what I was making.  I'm a list-maker and a recipe-follower; I don't generally just show up for the party without some sort of plan.

The key to spontaneous food shopping is to mentally catalog what you already have available at home and, if you can't remember for sure, hopefully you can call someone at home and have them check.  Adam regularly fields calls from me, asking if we have such and such ingredient in the fridge.  For instance, in this case, I knew I had pizza dough from Fresh Direct that I had put in the fridge to thaw just that morning.

So with pizza crust in mind, I went into Eli's.  As I perused, I thought about shrimp - what about a shrimp pizza?  Which then jogged my memory about a shrimp pizza I had at Ramblin Jacks in Olympia, Washington way back in 2000 when we lived there.  In my memory, it had shrimp, Brie, and apples on it; it looks like they're still serving something similar, sans shrimp.

Okay, so shrimp and Brie on the pizza.  Now what?  I was then reminded of shrimp skewers that Amy made when we were visiting them: bread cubes and shrimp tossed with olive oil, salt, pepper, and fennel seeds.  Shrimp and fennel seeds is a sublime combination.  But what about a vegetable?  Maybe baby spinach?  Sure, why not?  So I threw that in my cart too.

I generally like to have two separate pizzas - for variation - when I make them.  I also had two crusts.  Eli's had some gorgeous figs (from California, of course) so I grabbed those.  Blue cheese sounded too rich so I grabbed some ricotta - I thought they would be a good combination.  And I had ham in the fridge at home - maybe I could add that.

And I went home to put it together.

I shared all the above information just to illustrate my thought process.  It's all about thinking about tastes you've enjoyed before, putting them together, interpreting them differently.  And not being afraid to try something.  You might fail, but so what?  I still had cheddar cheese and a loaf of bread at home - if I made inedible pizza, we could always have grilled cheese.

Here's how it turned out: 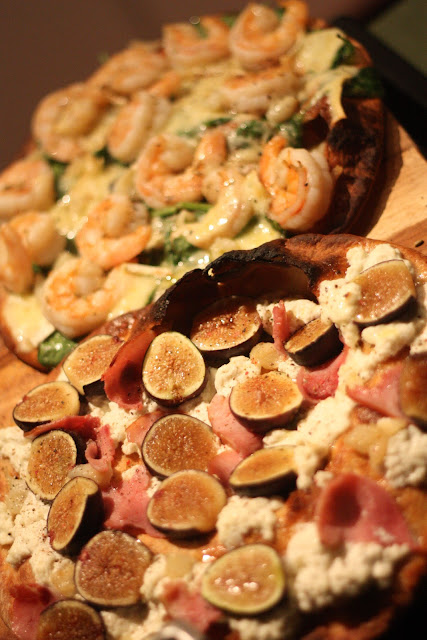 The fig pizza wasn't great, I have to be honest.  Figs and ricotta?  Great.  But it needed something...  I initially thought about walnuts, but I don't think that was it.  It needed brightening.  Maybe lemon zest.  Maybe red pepper flakes.  The blue cheese might have been the way to go.

The shrimp pizza was absolutely fantastic, though.  Brie and shrimp is a wonderful combination, and the fennel seed added some pep.  You could even add some actual roasted fennel.  I do think that, doing this again, I would add lemon zest to this as well.  I believe it was Mark Bittman who said, "I never regretted adding lemon zest to anything."  I subscribe wholeheartedly to that way of thinking.

I'm not going to regularly experiment like this - I still enjoy the list-making, menu-planning, and premeditation.  But this was fun; I like pulling from my previous memories and experiences of great meals.  Not to mention that, when you improvise like this, you begin to gain more and more successes.  And your confidence in the kitchen grows.

Eat, drink, and step outside your comfort zone.
Posted by Unknown at 7.10.11

I did a pizza with dried figs last weekend (Cook's thin crust recipe for the crust). I did it with bacon, mozz, and ground cherries. I think a little blue might have been what it needed. The ground cherries were nice.