"DWTS": Not as off-topic as you'd think

Any of you watch "Dancing with the Stars"? Anyone? It's okay, you can admit you watch it here - this is a safe space.

Well, I am CRUSHING on Rocco Dispirito*! I only knew him in 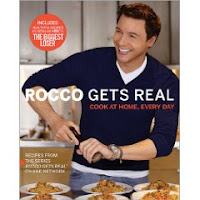 name before; I had never opened any of his cookbooks, and I think he's on TV...but I don't know which show. But now I know who he is. He's an awful dancer, but he is just so damn sweet and charming...and apparently he can cook!
So I'm going downstairs during my lunch break today to check out one or two of his cookbooks and see what he's about. If I like the cookbooks, I might buy one at my local bookstore.
Which I suppose is why he agreed to be on the show in the first place.
Eat, drink, and crush on celebrity chefs...
* Okay, so I just realized I'm an idiot. A simple Google search has revealed two ESSENTIAL things about Rocco Dispirito: 1.) He grew up in Jamaica, Queens...uh, that's where I'm located right at this very minute as I blog, and 2.) he's the chef and owner of Gramercy Tavern. Kind of important info I missed. Which is why I blog much more about the cooking I do...versus the restaurant scene. I really don't do the restaurant scene - I'm just not cool enough. I should, though, if there are other Rocco Dispiritos involved...
Posted by Unknown at 24.9.08

Email ThisBlogThis!Share to TwitterShare to FacebookShare to Pinterest
Labels: Dancing with the Stars, Rocco Dispirito