Alas, I had such grand visions of blogging all week.  Now I know that should I, under tragic circumstances, be a single parent, I don't think I could keep up this blog.  Time was so not my friend for the past five days.

Nevertheless, I was able to capture our meals sans Adam.  On Tuesday, it was naan pizza: 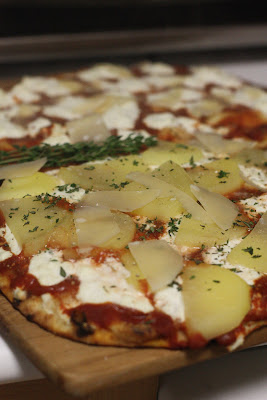 This...well, this turned out not great.  Serviceable, at best.  My plan was for potato and ricotta pizza.  I heated the oven to 400 degrees with my pizza stone on the bottom rack.  I drizzled each naan with olive oil, then added salt and pepper to taste.  I spread each naan with Pomi strained tomatoes, followed by fresh ricotta.

I left Bug's as is.  To mine, I added some boiled potato slices and red pepper flakes.  Then both naans went into the oven for about 12 minutes.  Once out, I added fresh thyme to my pizza and shaved Parmesan to both our pizzas.

The result was nearly crap, actually.  I was entirely too generous with the sauce so, once combined with the already moist ricotta, turned the naan completely soggy - you can't really see it in the photo but there were POOLS of liquid on top of the pizza.  And because there was too much sauce, the pizza was overly sweet, in my opinion.  And it looked bland - I think a spell under the broiler would have done those potatoes good.

Eat, drink, and in all things moderation.
Posted by Unknown at 2.10.10