I know you all know this but...I'm moving!  This Friday!  To Manhattan!
Adam and I have moved a lot in our lives: California, Virginia, Oregon, Washington, Arizona, New Jersey, Queens...  While our last move from Jersey to NYC was a bit rocky, we've been kicking butt on this one.
Most of our kitchen is packed up but, dammit, I'm still determined to cook at home this week.  Tonight was crostini with fresh ricotta, herbs, and sauteed grape tomatoes: 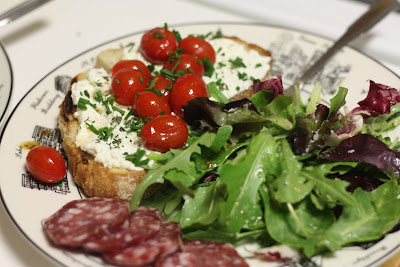 I kept out the cast-iron grill - it's a must, really - and then drizzled the bread with olive oil (normally, I would brush the olive oil on but the brush is packed up!).  I grilled the bread over med-high heat until toasted and lightly charred and set aside.  I poured about two tablespoons of olive oil into a skillet (nonstick or stainless is fine) and put over med-high heat.  Throw in a half-pint of grape tomatoes and toss occasionally until charred (careful: they spit).  Meanwhile, I chopped up fresh thyme and chives.  I also mixed up a vinaigrette (2 servings): 1/2 tbsp whole-grain mustard, 1/2 tsp sherry vinegar, 2 tbsp olive oil, salt and pepper to taste.  We also had some salami hanging out in the fridge and so I sliced that up as well.  Once the tomatoes were finished, I added salt and pepper to taste.  It was simple and easy, and it had the vague promise of summer, thanks to the tomatoes.

Not bad when you consider that this is what my cupboard looks like right now: 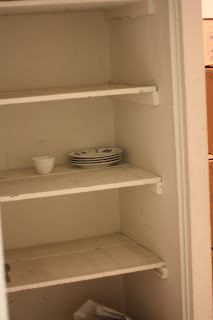 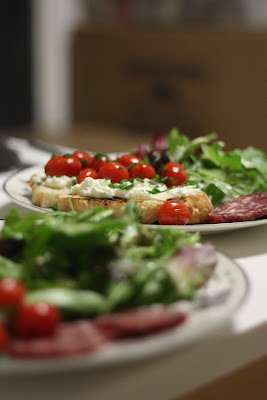 ...then why can't you?
Eat, drink, and make the most of it.
NOTE: So I had a great conversation with my friend, Kathryn, this weekend and we talked a bit about making meals for our kids.  This one?  Well, Bug wasn't about to eat tomatoes or salad.  So her version was the grilled bread with ricotta (and if she had known that her bread had olive oil on it, she wouldn't have touched it...so...shhhhh!) then some salami slices on the side.  Then I gave her a big bunch of grapes, which she eats like candy.  So she still had the same thing as we did - because I try to avoid making her a "kid dinner" when possible - but just a slightly different version of it.  And that is how we get by as parents...
Posted by Unknown at 21.2.11

Grape tomatoes always bring life to any dish. I love how it contrasts against the greens and makes it a happy looking plate. What a lovely mix. I'm getting hungry just by looking at it.