I'm not into cocktails.  For one, they remind me of college: lots of syrup, bad liquor, and smashing headaches.  For another reason, it's been documented that I don't have a sweet tooth and it seems like so many of the cocktails I've tried are sweet and sugary.  Gross.

Which also might be why I haven't always had the best experience with cocktails, as I tend to drink them after I've already had other things to drink.

Anyway, Eric asks how I feel about ginger.  Intrigued, I tell him I love ginger.  And he goes to work.  I loved the drink he brought me: it was bright and spicy but with just a tad bit of sweetness to balance it out.  It struck me as the perfect summer drink, and I was completely enchanted.

Fast forward to this past week and I'm back at Eric's place for a post-dinner nightcap.  I bypass his stellar collection of Scotch and ask for "that drink I had on the 4th."  I learned it was a Moscow Mule, consisting of vodka, ginger beer, and lime juice.  And today I made my own: 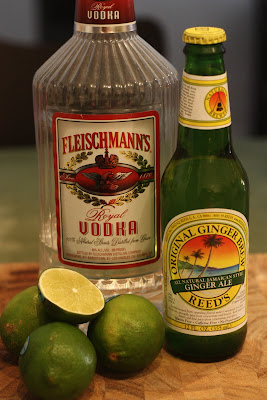 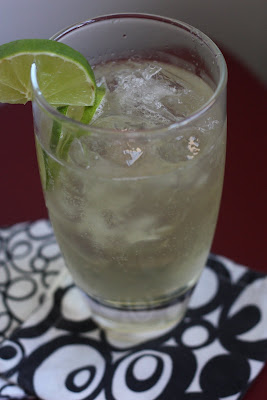 1 1/2 ounces vodka (I prefer Fleischmann's...a story about that in another post...)
Bottle of ginger beer
Juice of 1/2 lime
A couple of lime slices
Ice

Fill a large glass with ice.  Using a reamer, add lime juice to the glass.  Add vodka.  Top with ginger beer (not ginger ale).  Give it a stir.  Garnish with lime slices and/or mint.

There are other versions of this recipe, such as one from Oprah.  But it uses simple syrup, which I would never want to add here - it would just make it way too sweet.  In fact, every recipe I found used simple syrup, with the exception of the one on Wikipedia.  No matter the recipe, it's traditionally served in a copper mug but, really, who has room in their kitchen for copper mugs?  I certainly don't.

I also think it's worth noting that 16 ounces is no small drink.  Feel free to halve the recipe.  Sixteen ounces just seemed the perfect amount to drink while sunbathing on the roof deck of our building!

Oh, this one sounds right up my alley! I'm going to look for ginger beer next time I'm at the store.

I agree about most cocktails being too sweet. I've often ordered a Dark and stormy when going out--Dark Rum mixed with ginger beer and lime. Good combo as well.

Kristin, I don't know if you have and/or use Fresh Direct, but that's where I got my ginger beer. And, of course, we have the same taste in cocktails - next time you're in NYC, I'll put something together for us!