The Soul Twin (a.k.a. my best friend, Andrea) recently celebrated a birthday.  It's the first birthday I've actually shared with her in person in...years and years.  Maybe even since we graduated college?  So I was incredibly excited to take her out to Buvette for lunch this year to celebrate live and in-person.  I'd heard amazing things about Buvette, but I just never had the chance to go...it's in the West Village after all and, like most Manhattanites, I cry and whine about having to go to the opposite side of the island.

Anyway, Buvette surpassed every expectation I had and more.  The ST and I nibbled and drank for three hours.  The restaurant folks didn't seem to care; it truly is the sort of place you can sit and enjoy as long as you want.  We had sandwiches...we had a gorgeous selection of cheeses...we had a bottle of wine...but the stand-out for us were the Brussels sprouts.  We ordered them on a bit of a whim - they were "just" a side dish and, even though we're deep into winter, we're still obsessed with trying everyone's variation on Brussels sprouts.

Buvette's were heavenly.  They were sliced very thin and tossed with walnuts and cheese.  The taste was so fresh and so light, and we desperately wanted to be able to recreate them at home.  So we asked the server how they were prepared: Brussels sprouts, Pecorino, walnuts, olive oil, salt, and pepper.  That. Is. It.  To quote Ina Garten, "how easy is that?"

So my variation is below.  Make sure to use a very dry, crumbly Pecorino, and you also want to salt liberally.  The key, though?  You need to keep tasting, tasting, tasting to make sure you have the seasoning right.  And don't skimp on the olive oil! 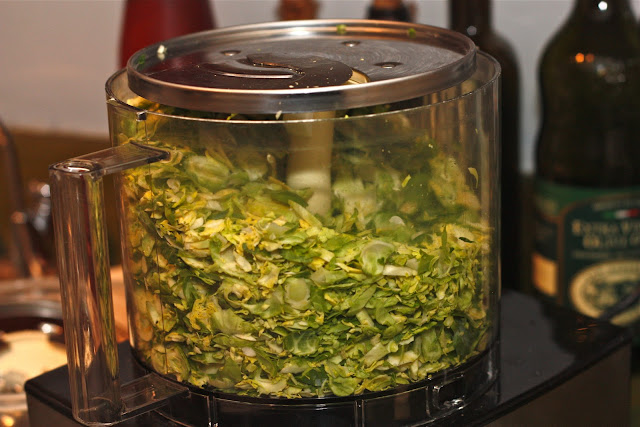 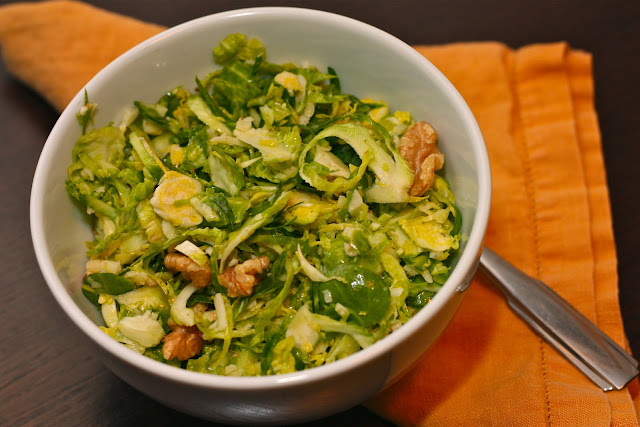 BUVETTE'S BRUSSELS SPROUTS
Serves 4 as a side dish


2. Add the grating attachment to your food processor.  Add Pecorino to grate.  Again, you can do this with a hand grater too.  Add cheese to Brussels Sprouts in the bowl.


KID-FRIENDLINESS: Who are we kidding?  Bug would never eat this.


WINE NOTES: Usually, a crisp white is the way to go with Brussels sprouts, but the Pecorino makes them a bit more red wine friendly.  I had the Foris Pinot Noir with this and liked it.

SO making this, with (walnut allergy ahoy) pine nuts! YUMMERS.

Looks delicious. I must try this. I feel I need a success in the kitchen these days. And brussel sprouts have such a bad reputation. Something must be done!:-)

My favorite is Brussel Spouts.You have sliced them very thin. Can't wait to try it. Also, like the new looks of your blog.