A work colleague of Adam's was recently visiting from the Boston area and we invited her over for dinner.  It was, truthfully, one of my biggest debacles as a host: I was way behind on the cooking itself and then I dropped a brand-new, entirely full bottle of $45 O& Co. olive oil on our tile kitchen floor...just as I was serving dinner.  But sometimes, in my obsession with trying to be a good host, I forget to pay attention to my awesome guests...Melanie reminded me of this when, a week after our dinner, she mailed us a lovely new bottle of olive oil to replace the one I dropped. 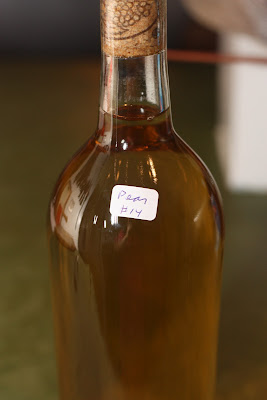 Melanie also arrived at our apartment with a bottle of pear wine, which her stepfather makes himself.  He also makes his own limoncello and wine.  Adam and I actually didn't open the pear wine that night, which I'm not sure followed the proper rules of etiquette.  Are there rules governing whether we should have opened it with Melanie or not?  Let me know if you have any ideas...

...but we did open it up about a week or two later.  It's fairly regular for us to pour a "nightcap" after Bug goes to bed: it's that drink we sip while watching a show or playing a game or chatting with one another.  It's a signal that our kid is in bed, we've eaten dinner, and our day is finally winding down.  On this particular night we felt like pouring something special and decided to open up the wine. 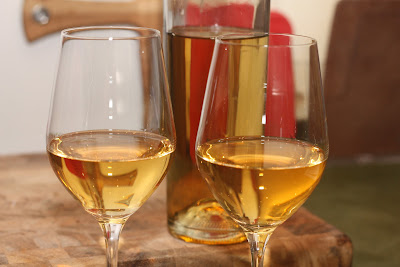 I wasn't sure what to expect.  Something über-sweet, for certain, and maybe a bit syrupy.  But I didn't know if it would be very pear-specific or what other flavors I might encounter.   The rich golden color was just gorgeous - I loved holding it up to the light.  And the flavor?  Beautiful and infinitely more elegant than I was expecting; I was also relieved to discover it wasn't nearly as sweet as I had expected.  I also got some honey and vanilla on the nose, as well as on the palate. It's a dessert wine, to be sure, but it was just more subtle and light than I thought it would be.  In short, it's a new favorite. 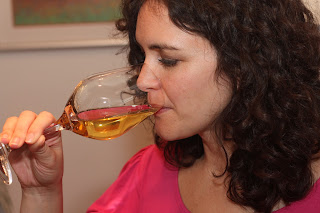 How do you score a bottle?  Well, you really can't score a bottle from Melanie's stepfather; in fact, I'm conspiring myself to acquire another bottle (or two)!  It involves sending Adam up to Boston under the guise of a work project of some sort, buttering Melanie up, and hopefully sneaking a bottle home with him (I kid, Melanie!).  But I did find lots of web resources for making your own: this site gives recipes/instructions for making two different kinds of pear wine (one uses raisins and sugar for sweetness, the other uses honey and is more mead-like).

But if you're more my style, then you just want to buy it.  Hillcrest Orchards has a pear wine.  Honeywood also has a version; I haven't tried their pear wine, but their other wines have proven way, way too sweet for me in the past.  And I'm very curious about Maple River's pear wine: they're based in North Dakota, which isn't normally conducive to pear growing but they make it work (but, dear god, they need a web designer).  Sounds like a unique wine tasting experience.  Lastly, having tasted a few wines from Virginia, I've been rather impressed with what they've produced (see my post about Villa Appalaccia).  Brooks Mill Winery in Virginia does a pear wine that I'm particularly interested in tasting.  Do you have any wineries you love who do a pear wine (or other fruit wine)?

According to Miss Manners (and Emily Post, etc.) it's actually considered rude to bring wine to dinner: it assumes your host cannot adequately choose a wine for your meal. Take that as you will...

Oh, I know that hostess scene! I think I am becoming better at realizing that people actually came to see me and talk to me and not inspect whether I cleaned my house or prepared a culinary wonder for them. But it's hard! I don't know why I want everything to be perfect? It's not that I expect perfection in anyone else. A shrink could probably tell a lot about me from these facts.

I'm curious about the etiquette concerning the gift wine as well. I think I have heard that you shouldn't open it when they are there - it's a gift and not a contribution to the dinner - but what do I know?

Oh my goodness ~ so sorry about the oil. I'll bet your floor is still slick. Whatcha gonna do at that point. You will certainly be laughing about that one for a long time not that you have recovered. MOM

I've heard that too, Lazygal. That said, though, when I get the inevitable question from my dinner guests - "What Should I Bring?" - I tell them wine. Mostly because 1) I like to be introduced to new wines, and 2) it's usually one of the more expensive parts of a meal so it's always nice to get an extra bottle. I rarely open it when my guests are there...usually because it doesn't pair well with what I'm making. But I have some friends - Elyse! - who ask what I'm making and bring a matching bottle. Lovely!

Carina, totally. I'm a perfectionist...and I'm the WORST at giving disclaimers before any dinner party. The WORST! "I'm sorry but I overcooked the pasta just a bit..." If I would keep my mouth shut, they probably wouldn't notice... Yep, got your comment - weird re: my Tumblr. Here is the link: http://www.tumblr.com/blog/lauraalutz That should be right? But, seriously, I'm never on it. I find the format so bizarre. Pinterest on the other hand...

Mom, I couldn't believe it when I dumped that bottle. FIrst the glass...then the oil... It took a LONG time to clean it up. The saving grace was that it wasn't a meal that had to be served immediately so I could let it sit while we cleaned up the disaster! The perfectionist side of me was FREAKING OUT but the more rational side of me was comforted by the fact that we had a good story to take away from the dinner...

I do that as well - the disclaimers - but not nearly as often since I watched Julie & Julia. Julia Child is so right. You shouldn't apologize - the guests don't know how it was 'supposed' to be.
Off to check out your tumblr -I've been cheating on my tumblr with my pinterest too:-)