You guys, I am so pumped.  Your notes have been so encouraging, inspiring, and motivating.  And after two days of increased mindfulness and new motivation, I feel better already, both physically and emotionally.  And my favorite part is that some of you have told me that you even bought FRENCH WOMEN DON'T GET FAT and you're reading along with me!  YES!  You guys are the best!

I read the first three chapters yesterday and was reminded why I love this book so much.  The key is to read it with an open mind, and you need to be ready to really make some changes.  That's where I was at in 2005 when I first encountered it, and that's where I'm at today: open-armed and ready to have my world rocked again.

I loved page 10 (in the hardcover edition) where Mireille Guiliano says:


[...] the goal is to develop what works for you as you cultivate a new intuition.  I'm not presenting prescriptions so much as templates.  Tailor them according to your preferences, paying attention to your own body, schedule, environment, and other unique characteristics.  In fact, my emphasis is on the simplicity, flexibility, and rewards of doing it yourself.

On that same page, she says about Phase Two of her "lifestyle program":


It won't be a dietary boot camp, merely a chance for your body to recalibrate.  There is discipline, but flexibility is vitally important, especially at this key motivational stage: the value of avoiding routine both in meals and in activities, emphasizing quality over quantity.

The bolded words are my own - I wanted to draw out particular points that I find super important. 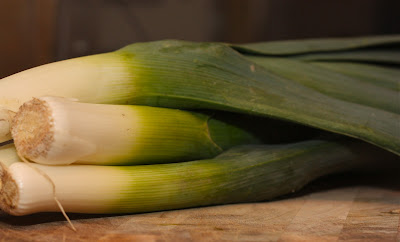 So today I'm making the Leek Soup that she outlines at the end of Chapter 2 (and at the beginning of Chapter 3).  It's sort of a detox/cleanse.  As I mentioned yesterday, I didn't do this part when I first "went French" in 2005 - I didn't like leeks, or hardly any vegetables, at the time.  But now I love them so I'm going for it.  You can feel free to omit this part of Guiliano's "lifestyle program".  You'll also know from your reading that Guiliano recommends keeping a food diary, but I didn't do that back in 2005 and I'm definitely not going to do it now - it feels way too much like homework to me.  Again, do what works for you! 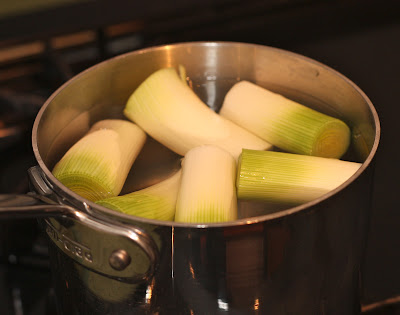 1. Cut off the ends of the leeks, both the roots and the dark green parts, leaving the white parts plus a suggestion of pale green.  Clean the leeks and rinse well to get rid of sand and soil.

2. Put the leeks in a large pot and cover with water.  Bring to a boil, reduce the heat, and simmer uncovered 20 minutes.  Pour off the liquid and reserve.  Place the leeks in a bowl.


The juice is to be drunk (reheated or at room temperature to taste) every 2 to 3 hours, 1 cup at a time.

For meals, or whenever hungry, have some of the leeks themselves, 1/2 cup at a time.  Drizzle with a few drops of extra-virgin olive oil and lemon juice.  Season sparingly with salt and pepper.  Sprinkle with chopped parsley if you wish.

This will be your nourishment for [two] days, until Sunday [or in my case, Wednesday] dinner, when you can have a small piece of meat or fish (4 to 6 ounces) with a bit of butter or olive oil, and a piece of fruit.

Again, I'm adapting this to me.  Because, guess what...I'm so eating dinner tonight!  It just doesn't fit my lifestyle to sit at the table with a single leek and some broth...while Adam and Bug eat some awesome dinner that I made for them.  Not gonna happen for me.

But I do plan on cutting my normal portion size in half.  If I'm still hungry after that, I'll have a few bites of leek or drink some broth.

I should also note that, should the leek soup thing be too extreme for you, Guiliano also gives a recipe for something called Mimosa Soup.  It's much more substantive with hard-boiled eggs, carrots, cauliflower, and other assorted goodies.  You can give that a try instead.  It's only for two days, and this is truly the only extreme part of "going French".

I'm off to read some more FWDGF and drink lots of water and tea...hopefully that will distract me from the fact that all I had for breakfast were two boiled leeks!


Eat, drink, and learn to love leeks, my fellow Frenchies.