So I’ve been doing all kinds of wonderful, fun things lately. My last post is evidence of that. And there has been lots more fun since then and I’ve been so excited to tell you all about it. However, because I’ve been having so much fun, I have become run down and exhausted. Which naturally left me no energy to blog. Indeed, I left work early yesterday and today, sick. So my conundrum is this: do I stop doing so much so that I have more time to blog? Or do I keep doing so much, thus leaving me no time (or inclination) to blog?

The most exciting event for me recently is this: Queens Library’s Literature Meeting*. We held it yesterday at our branch. We do

this event every year and, in the past, we’ve had such luminaries as Paula Danziger and Walter Dean Myers. This year, we decided the time was ripe for a panel on graphic novels. To get to the point, we invited Françoise Mouly (editorial director of TOON Books, art director of The New Yorker, and Art Spiegelman’s wife), Mark Siegel (well-known illustrator and editorial director of First Second), and Elicia Castaldi (illustrator of Middle School is Worse than Meatloaf).

As you can imagine, with a new format, there were lots of difficulties. Hell, with three different MAC laptops in play, there’s bound to be issues!!! Add to that the surprise appearance of Diamond Comics Distributors, who planned a 10-minute pres 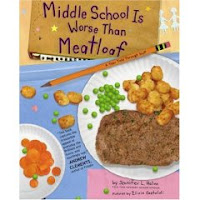 entation that we were not made aware of…oh, and poor Françoise Mouly went to our Central branch instead of Flushing and was very late. Add to that a colleague that repeatedly kept saying to me, “See?! I told you there would be technical glitches! I told you we should have made David [’ techie] come!” Last but not least, the large Chinese population in decided this would be a swell day to protest the Bush administration outside of the library...a couple hundred of them! If there was ever a need for wine, it was yesterday morning!!!!

You know what, though, it’s funny how things turn out. Elicia Castaldi brought her boyfriend, David, who somehow got every one of the presentations up and running. And it was a good thing that we made room for John, the Diamond Comics guy, because his presentation was really fantastic. And even though Françoise was late and flustered, she pulled herself together and gave a fascinating talk that people stayed for, even though we went over time. And the protest was just another reminder that living in NYC is always an adventure. As for the colleague who wouldn’t leave me alone…well, I still don’t know how I can deal with him in a grown-up manner. Best to keep my mouth shut.

John, the Diamond Comics guy, talked about the history of comics and graphic novels, calling it “the new rock n’ roll.” He was approachable, funny, and interesting. Mark Siegel…well, it’s Mark Siegel. He talked about First Second’s vision and told good stories. Most of the people in the room hadn’t heard him speak before and, well, let’s just say that I had a co-worker that declared she was leaving Queens Library to go work for Mark. I think the whole room was swooning. Elicia was a great complement to the guys – she was sweet and modest, and I enjoyed the images of her artwork appearing in flashes behind her on the screen. And lest I forget to mention, she and her boyfriend are probably two of the most beautiful people you’ll ever meet: someone (I won’t reveal who said it) said, “They look like they came straight off a movie screen!” Also, brave soul that she is, this was Elicia’s first library visit! And with all our crazy technical glitches! Françoise was the consummate pro: gracious and beautiful under pressure. Unfortunately, her talk did have to be abbreviated, but what she did show us was completely fascinating. I’m longing to hear the rest of her talk. Later, on the subway ride home, Mark and Françoise spoke French (I understood every 3rd word) and talked about visual literacy – needless to say, I was in heaven. I’m such a geek when it comes to these things…not to mention that I have an overdeveloped sense of hero worship when it comes to these powerhouse industry types (authors, illustrators, and Arthur A. Levine fit into this category).

I got warm, positive feedback from the librarians who attended; not to mention that some admitted to not having read a single graphic novel before the event…and were happy that now they have. Glitches aside, I will call the event a success. It seemed to reflect my own personality: flying-by-the-seat-of-its-pants, spontaneous, lack of attention to detail…yet also managed to avoid disaster and it was filled with laughter and fun.

Thank heavens it only happens once a year!

* Elicia emailed me today post-meeting, asking me for the fancy name for our meeting so her rep can include it in Elicia's info. Unfortunately, there is no fancy name. This is only the second one of these I've participated in, and we've always called it "the lit meeting." But I'm sure there's some fancy name we can give it before I email Elicia back tomorrow!