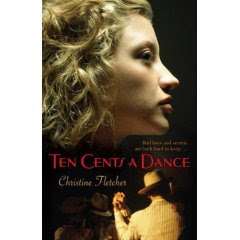 Ruby Jacinski is in a fix: forced to work in the packinghouse to support her ill mother and younger sister, she can’t see an end in sight. She owes back rent to the landlord, and her mother can’t keep food on the table. Pre-World War II Chicago ain’t an easy place to live. Then Paulie Suelze, the local bad boy, tells Ruby how she can double her weekly salary: taxi-dancing. Ruby, who wants to get out of the slums and likes a little danger, dons sequins, satin, and heels and starts working at the local dance hall. Most of the men are harmless, giving her a 10-cent ticket to dance with her, and then going on their way. Other men, though, have more sinister intentions. Ruby is soon in it deeper than she ever thought and has to rely on her scrappy and tough attitude to get herself and her family out the hole that she dug.

Page-turner: that’s the best way to describe this book. Was it flawed? Of course. Ruby gets into one scrape after another, and one contrivance after another gets her out. I was able to easily 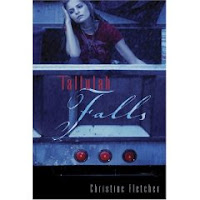 overlook this (I don’t claim that everyone will), mostly because I find Christine Fletcher to be a really wonderful writer (, her debut novel, is some of the better writing I’ve encountered in YA lit). She captures the time period – the jazz references are great – and, as a reader, you truly feel transported to the 1940’s. The characters aren’t one-dimensional; they’re complex and rich. Ruby’s choices are believable when you think about her age and her circumstances – your heart hurts every time she makes a decision that will land her in more trouble. Her mother is also an intriguing character: she turns a blind eye every time she’s faced with evidence that Ruby isn’t all she says she is. Out of love and necessity, Ruby’s mother wants to keep believing that Ruby is working the night shift as a phone operator. Ultimately, I loved the theme that, as you get older, you gather enough experiences – good and bad – that you are forever changed and you can’t go back to “before.” This is, in every way, a coming-of-age story, as you watch Ruby grow from scrappy kid to a mature woman.

Christine Fletcher is quickly becoming one of my favorite authors. I recommend Ten Cents a Dance with enthusiasm to teen girls 14 and up.

NOTE ON THE COVER: Curiously, on Good Reads, this is the book cover on display:

I am curious about the change because I like the one above better - it's bolder and simpler, not to mention that it really gives you some information about the book's storyline. That said, I really like the title in red on the actual cover, and I also appreciate that they show Ruby's face, rather than featuring another decapitated girl on the cover. So I suppose you could argue each cover has its strong points...