As I mentioned earlier, I recently bought Jamie's Italy by Jamie Oliver. I already thought I was in love with Cook with Jamie but, alas, that affair wasn't meant to me. It's all about me, Jamie, and Italy.

So the cookbook has a whole section on pizzas, and I want to try every one of them; truly, that's how good they sound. So this is my first go. Jamie, naturally, has a recipe for homemade pizza 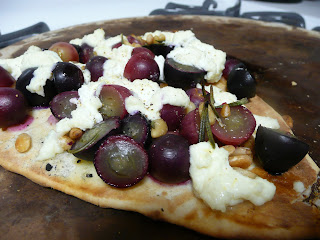 crust. That's all well and good, but here are my problems with that: 1) I've had horrific luck in the past using fresh pizza dough, 2) I don't have time on the weeknights to make fresh pizza dough, and 3) I have yet to find time on a weekend to make fresh dough and freeze it. So we're left with naan, thanks to Nigella Lawson's recommendation. I know naan may be difficult for some to find - I think you can easily try pita bread and/or flatbread instead. Hell, Giada De Laurentiis made something similar to this on her show*, except that she pressed the grapes into foccacia bread, sprinkled rosemary and pine nuts on top, and omitted the ricotta. So feel free to experiment, people!

So I used naan. And Jamie asks for a handful of green and red grapes, but I could only find red 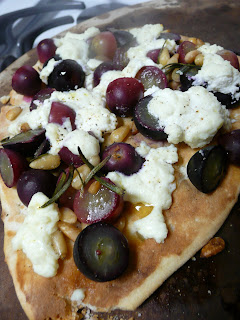 and black. Halve them. Put them in a medium bowl with 1 tbsp. pine nuts, "small handful of fresh rosemary", and 1 tbsp. white wine. Allow it to sit for a few minutes. Now I went renegade here: Jamie also asks for 2 tbsp. of vanilla sugar and suggests this dish as a breakfast or dessert with vanilla ice cream. Give that a try, if you'd like. But I made this savory. I added salt and pepper to the bowl of marinating grapes.

I then scattered the mixture over two naan, including the sweet juices. I added fresh, crumbly ricotta on top. Put it on a pizza stone in a 400 degree oven for about 12 minutes. When it was done, I drizzled extra-virgin olive oil over the top, and served it with a salad on the side. We drank a Spanish Rueda with this, 2006 Las Brisas, which was the same wine I used for the marinade. The label describes the ripe flavors as "racy". Indeed!

Shazam! A weeknight dinner that took me just under a half-hour to make. Take that, Rachael Ray!

Eat, drink, and don't sweat it on the weekdays.


*I tried to look up Giada's recipe for all of you, but Food Network won't give it up.
Posted by Unknown at 8.5.08

This looks so nice. I love pizza NY style sometimes but also like this with just a few different items and not overly done.