So awhile ago, Amateur Gourmet posted a recipe for Crispy Salted White Chocolate Oatmeal Cookies and I wanted them.  But you know about me and baking.  So I told my friend Josh, a fellow gourmand and a passionate fan of all things pork-related, that if he made me the cookies I would make him a meal consisting of all bacon-themed dishes.  He made me the cookies - they were sooooo goood! - and thus was born Bacon Fest 2009.
Josh and Lori came over at 4 p.m., which was a little early for the actual appetizer I had planned so I started with a quick and easy hors d'oeuvre recommended by Tyler Florence in Food & Wine : bacon strips with mustard.  Bake bacon strips at 375° for about 20 minutes, until crispy.  Drain, then serve them with Dijon mustard for dipping (warm or at room temp).  I used a kicky Dijon honey mustard. 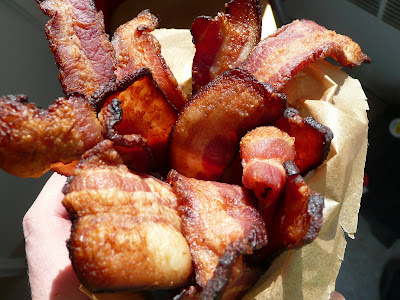 For the appetizer, I made Reblochon Tarts with Bacon and Fingerling Potatoes from Food & Wine.  I couldn't find Reblochon at my nearby cheese store so I substituted Taleggio; the recipe also says you can use Saint-André.  The recipe also calls for "cold all-butter puff pastry."  I don't know if the Pepperidge Farm puff pastry is all-butter, but I used it and it turned out great so I wouldn't worry about trying to find something fancier.  The tarts were good and Adam thought they shouldn't be changed, but Josh and I thought it tasted too much like breakfast - we wanted some acid, some bite.  In the future, I might try lemon zest...a sharp Cheddar...or even Gorgonzola.  The recipe recommended a Pinot Noir so we drank it with A to Z Pinot Noir from Oregon; it paired perfectly. 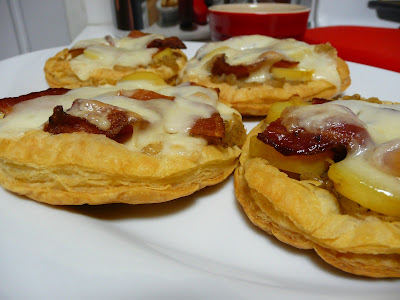 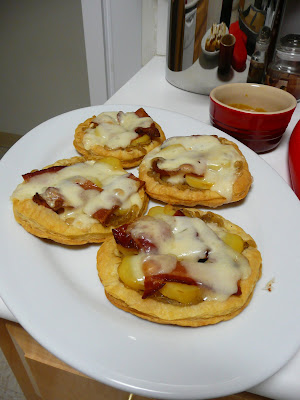 For the main dish, I made Pan-Roasted Pork Tenderloin with Fennel and Pancetta-Molasses Dressing accompanied by Roasted Bacon-Wrapped Lady Apples.  The pork recipe comes from Michael Chiarello's book, At Home with Michael Chiarello , but I did some adapting (Chiarello wants you to sauté the spinach - I didn't).  Since there's no link, here's a rough recipe:
Dressing --
1 lb. pancetta, sliced 1/4 in. thick
2 shallots, thinly sliced
2 tbsp. thinly sliced garlic
1 tbsp. finely chopped fresh sage
1/4 c. light molasses (Chiarello calls for light, but I could only find dark.  Worked great so don't sweat finding the light stuff.)
1/4 c. balsamic vinegar (the vinegar really stands out so don't use really crappy stuff)
3 pork tenderloins, 1 to 1 1/4 lbs. each (I only used 2 for the 4 of us.  We ate it all but, good god, it nearly killed us)
1/4 c. Fennel Spice Rub
2 tbsp. extra-virgin olive oil
8 oz. baby spinach
Sea salt
Freshly ground pepper
Make the dressing:  Cut the pancetta slices into julienne strips 3/4 inch long and 1/4 inch wide and thick (these are Chiarello's measurements, but I assure you that I didn't have a ruler out and you shouldn't either).
In a large skillet, cook the pancetta over med heat, stirring occasionally, until it is almost crisp, about 5 minutes.  Raise the heat to med-high.  Add the shallots and cook for 1 minute, stirring occasionally.  Add the garlic and cook, stirring occasionally, until it turns golden-brown, about 3 minutes.  Add the sage and cook for 10 seconds to release its fragrance (believe me, you'll smell it!).  Stir in the molasses and vinegar.  Cook until half the liquid has evaporated, about 3 minutes.  Remove from the heat.  I made the dressing about 3 hours ahead and just reheated it on the stove before serving.
Preheat the oven to 425° F.  Evenly coat the tenderloins with the fennel mixture.  In a 12-inch ovenproof skillet, heat the olive oil over high heat.  When the oil is hot but not smoking, sear the tenderloins on all sides, about 5 minutes total.  Move the skillet to the oven and cook the tenderloins until an instant-read thermometer registers 155°F for medium, 6-8 minutes (I don't have a thermometer.  I took it out after 6 minutes and it was med-rare, which is what I wanted.  Add another minute, if desired.)
Remove the pan from the oven and transfer the tenderloins to a cutting board to rest for 3-5 minutes.  Reheat dressing, if needed.  Slice the pork tenderloins across the grain on the diagonal.  Lay spinach on a platter and lay pork on top.  Spoon dressing over the top.  Serve warm or at room temperature.
For the apples, I went to Epicurious and entered in "apples" and "bacon".  And here is the resulting recipe .  I adjusted it: 1 slice of bacon and 1 apple per guest.  Preheat oven to 400°F.  Cook bacon in a 12-inch heavy skillet over moderate heat, turning over once, until edges are lightly browned but bacon is still flexible, 6-8 minutes total.  Transfer to paper towels to drain.  While bacon cooks, core apples, if desired (I did), from bottom, with pointed end of a vegetable peeler or a paring knife, leaving stems intact (this is dangerous work, people - watch those fingers!).  Wrap a slice of bacon around each apple, securing ends with a toothpick.  Brush a shallow baking dish with some bacon fat (YUM!), then add apples to dish and bake, uncovered, 10 minutes (this left our apples with some crunch still...add more time if you want a more cooked result).
Per Chiarello's recommendation, I bought a dolcetta to drink with this: Gianni Voerzio dolcetto d'alba 2003.  Again, it was a lovely pairing.  Here is the party on a platter: 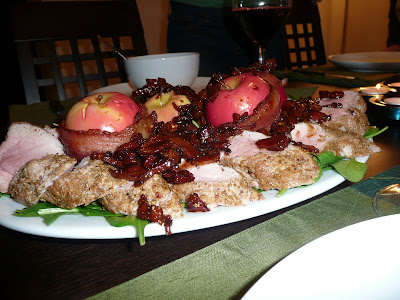 For dessert, I couldn't bake, obviously.  That would defeat the reason for having Bacon Fest for Josh!  So I made "Bacon Candy":
1/2 c. brown sugar, packed
1 t. cinnamon
1/2 lb. sliced bacon
Combine sugar and cinnamon.  Cut each bacon slice in half, crosswise and coat each slice with the brown sugar mixture.  Twist bacon slices and place in a 13" x 9" baking pan.  Bake at 375° for 15 minutes or until bacon is crisp and sugar is bubbly.  Place cooked bacon on foil to cool.  Serve at room temperature.
I served it with vanilla ice cream dusted with freshly grated cinnamon: 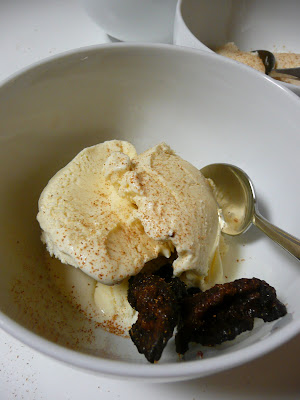 One more wine note: awhile ago, I blogged about meeting Andrew Dornenburg and Karen Page at Pour on the Upper West Side.  I also blogged about a wine - Corte Rugolin Valpolicella Classico - that was described as having "salty, fresh bacon on the nose."  Naturally, I saved it for this occasion.  I didn't get the bacon on the nose, frankly, but it was a bright and juicy wine, nevertheless.  I would absolutely plop down $21 for another bottle of this - worth the price.
With every ounce of food consumed, it was time to call it a night.  Bacon Fest was over for this year with promises to repeat the tradition annually...until Josh suggested doing it every 3 months.  Lord help us.
Eat, drink, and toast to the pig!
Posted by Unknown at 16.2.09

Josh spent the rest of the evening drunkenly muttering "That bacon ice cream -- oh my god, that was just so good, bacon ice cream...." I think 3 years of life is a worthwhile trade-off for consuming magnificent bacon confections. Well done, darling. Well done.

Ok. We are going to try to recreate this bacon-y goodness out here on the Island soon. I will let you know how it goes! Thanks for sharing!

Hey, Stace - one thing I didn't mention in my post and forgot to say to you at the RH preview was that I was cooking from 10 a.m. that morning until the actual meal. It was a full day. But it was also very leisurely - I was never rushed, and that's a wonderful thing.

Thanks, Lori! That meal is going down in the history books. I had the BEST time!