I Went to London Tonight

I couldn't decide what to name this post: "Diet?  What Diet?!"...or "Nigel Slater is my New Boyfriend"...or "I Love the UK"...but I had to settle on the one I did.  Just know that I didn't make the decision lightly, though...

While in Denver for ALA Midwinter, I spent a ridiculous amount of time in The Tattered Cover, which is just a haven for book lovers, a Mecca.  While there, I discovered Nigel Slater's Real Fast Food, which promises food ready to eat in 30 minutes.  Naturally, I ignored that because this whole 30-minute-meal thing is crap.  While perusing the recipes, though, I thought they all looked simple but flavorful, fun but nourishing.  So I bought it.
And tonight I am not sorry.  The first "recipe" I made from the book was the "Chip Butty", which wasn't even a recipe.  Apparently it's a "French-fry sandwich" that's a "true British institution."  Nigel gives no recipe, but only tells us that we have to  follow the rules:

- Use thick-sliced crappy bread (or "plastic" bread, as he puts it).  The craptastic bread soaks up the grease better.
- Fry the potatoes in drippings, not oil.  Then generously apply salt and malt vinegar.
- The sandwich must "drip with butter."
Lastly, Nigel suggests that the sandwich is best when eaten "slightly drunk."  MY KIND OF RECIPE.
So here is what I produced: 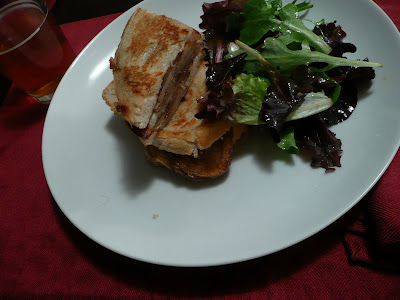 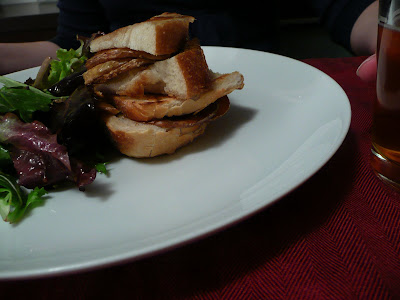 There are no words, truly, to describe this.  I slathered butter all over the damn place, and I fried the potatoes in lots of bacon fat, which I keep saved in my fridge.  I doused the whole thing liberally with malt vinegar.  By the time we had dinner, Adam and I had finished our first beer.  We drank our second beer with the meal.  We had a third beer for dessert.  Slightly drunk?  Done.
I don't know if this is how the Brits actually do it, as I've never been to the UK, but my version still rocked.  And to top it off, I played my "Euro mix" on the iPod while we ate: British Sea Power, Bloc Party, Buzzcocks, The Smiths, Dolores O'Riordan, The Libertines.  Adam looked at me, grease dripping down his finger, and said, "God, this makes me want to go to London."  Which is just about the best compliment I think a cook can get.
Eat, drink, and travel.
Note: Upon further research, I don't think I did the chip butty right.  I sliced my potatoes in a mandoline and fried them up that way.  But everything I'm reading says you need to do them in a traditional "French fry" manner.  I don't know, though...I think I still liked my variation - it laid flat, almost like a thick potato panini.  Additionally, I don't think I was supposed to the grill the bread.  My sources are telling me I was supposed to put butter inside the sandwich and let the hot fries melt the butter...and not have grilled bread.  Hmmm...
See here, here, and here.
Posted by Unknown at 2.2.09

In the Jaqueline Wilson book Candyfloss, the main character's dad runs a chip buttie cafe. They sounded delicious...now I actually know someone who had one! The only thing that comes close for me is poutine.