I've been meaning to do this since ALA Midwinter Conference but I just kept putting it off...
While I was in Denver in January for the conference, I found myself with some unexpected free time on Tuesday.  Most of my colleagues had started home by that point and all my meetings were finished.  So all you book people will know where I headed: Tattered Cover book store , of course!  It was every bit as lovely as I had expected - dark wood, lots of hushed intellectual conversation, nice people, plush seating.  After a couple of hours of perusal, I purchased a few books: Real Food Fast by Nigel Slater, Cooking from the Heart of Spain: Food of La Mancha by Janet Mendel, Gallop! by Rufus Butler Seder, and Judy Moody Gets Famous by Megan McDonald.  I'm guessing you can tell which were for me and which were presents for Kiddo.
As I left the store and walked down Wynkoop Street, I saw this symbol on a sign with an arrow pointing down the alleyway: 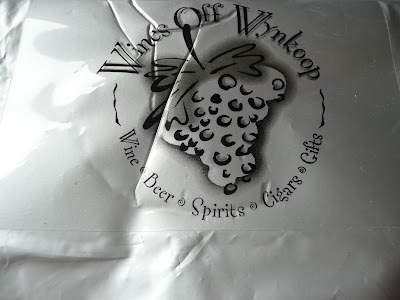 Wines off Wynkoop.
I thought to myself, "Why not?"  So I diverted myself down the alley and entered the wine store.  It had a similar feel to Tattered Cover: dark wood, cozy, bright.  I asked the friendly guy behind the counter about their local wine section: "What would you recommend in a red and a white?"  He recommended the Trail Ridge 2006 Gewurztraminer, explaining that he personally didn't go for Gewurztraminer, typically, but the Trail Ridge was milder and more food-friendly than other versions. 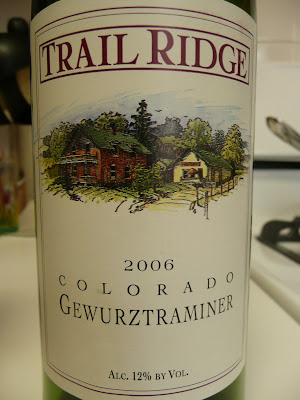 Upon drinking it when I got home, I found his assessment to be spot-on.  It still had that typical crisp sweetness, but it wasn't cloying or over-the-top.  The Colorado version wasn't nearly as showy, which is a compliment.
The red he recommended was the Verso 2003 Cabernet Sauvignon.  Again, like the Gewurztraminer, I felt like this was the wallflower version of a true Cabernet: it was jammy and dark, but not as much as you would expect from a typical Cab.  And this is again a compliment: in an age of so much in-your-faceness, I found this Cabernet's shyness refreshing. 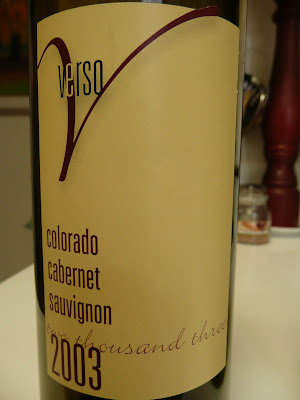 And as if I wasn't already having a fantastic day, I finished that night eating dinner alone at Osteria Marco.  If you find yourself in downtown Denver this is the place to go.  I loved the way that you enter through a modern lobby but, once you take the stairs down, you enter this dark-wooded, cozy atmosphere.  The service was attentive without being hovering, and the food was outstanding.  I finally (!) was able to try burrata (which I had heard so much about from Art & Aioli): Osteria Marco makes their own in-house version, along with all their charcuterie, and it was delectable.
Here is one thing that happens when you eat alone: you end up sitting in weird nooks and crannies of restaurants.  I should know: I love eating at a restaurant alone so this happens to me quite a bit.  In this case, I ended up sitting near the guy who makes the paninis so I was able to watch him man the presses.  And I learned a ton.  For one thing, he had the heat much lower than I have mine at home because those sandwiches were there for a long time.  He also pressed them down...and down some more...to make them super-thin.  I don't worry that much about mine - I usually throw some weight on top of them and then walk away.  I know now that I shouldn't be so flip about them in the future.  Well, the guy noticed I was watching him intently and I think he told the manager because he eventually came over and chatted it up with me.  I learned about the restaurant and that the manager was planning on opening his own restaurant someday.  And I also got a good laugh when I told the manager I was in Denver for the ALA conference and, showing no restraint, he exclaimed, "But you're under 40!  And thin!"  To be fair, he was apologetic for his outburst - I didn't take it personally - you have to be able to laugh at your profession, right?
Overall, it was such a beautiful, phenomenal day in Denver.  It's been difficult to look back at that time with fond memories, as it makes me miss Kate and Kathy so tremendously, but Denver really was one of my favorite conference experiences to date.  With a special thanks to Kate and Kathy (of course), Patricia, Brenda Bowen , Jenny, my friends at Random House, and Kathy Nuzum.
Eat, drink, and look forward to the opportunity to visit Denver again.
Posted by Unknown at 15.3.09

Great post! Thanks for the shout out. So funny as I have not read any blogs in weeks and the first post I read of yours has me mentioned. Cool. Your trip sounds so nice.

What a wondederful post! I am ready to head back to Denver and retrace your steps. I noted the wine too and will see if I can find it here. Thanks!

Nicole, thank YOU! I don't think I would have tried the burrata without your amazing descriptions and photos!

Lynn, I know, right? It really was a fantastically awesome conference, and I can unequivocally state that the RH dinner was my favorite part. I had a ridiculously good time.