More than a year ago, I blogged about the pumpkintini: a drink that I had been wanting to make for ages but had remained elusive to me.  This was because I couldn't find Sortilège, a maple liqueur that is incredibly difficult to find in stores.  The unpleasantly wry salesman at a Manhattan wine store retorted when I asked him if they had it in stock, "No, but if you go to France, be sure to pick some up for me!"  Yeah, thanks for the help, schmuck.
Well, I finally found some.  Thus, the pumpkintini could be mine.  Here is the photo: 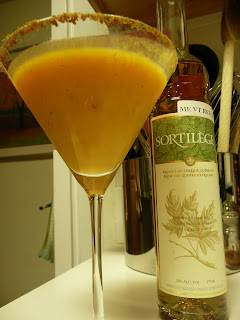 And all I can tell you was that it was disgusting.  Ultimately, I figured out that it was because I used 100% pumpkin versus the "pumpkin pie filling" that the recipe calls for.
So I went on a search for pumkin pie filling...and couldn't find it anywhere.  So I took the remaining pureed pumpkin and added brown sugar, cinnamon, cloves, "pumpkin pie spice", and allspice until it tasted similar to pumpkin pie filling.  I didn't measure - I just kept adding and tasting, adding and tasting.
And here is the second attempt: 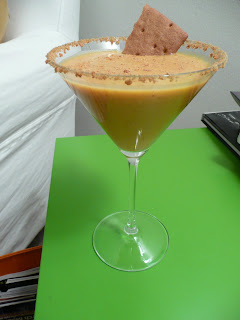 Again, I did not in any way like it or enjoy it.  It was definitely improved - it tasted a lot less like a raw earthy alcoholic plant and more on the dessert end of things.  But it still had a planty dullness to it...with the unpleasantness of an alcohol kick at the end.
So that is the end of the pumpkintini adventure.  And I'm glad I can say I tried.  I've heard that Sortilège is fantastic on vanilla ice cream so that may be my next experiment, as it's difficult to go wrong with vanilla ice cream and any fill-in-the-blank liqueur.
Eat, drink, and beware of cocktails with crushed graham crackers on the rim!
Posted by Unknown at 22.3.09

Oh, boo! In theory it sounds delish...was it a consistency thing...or simply the taste?

Both, actually. The consistency was weird too. Almost like Campbell's tomato soup. The recipe says to put it in a shaker and then pour it through the strainer. I did this recipe twice and both times the drink was too thick to make it through the strainer. So then I had to sort of crack the lid open just enough for the liquid to come through. Which gave me chunks of ice in my drink.

Sigh. This drink ultimately ended up being a pain in my arse.

Not sure I would like this no matter what kind of pumpkin you use. I love pumpkin pie but a pumpkin martini? I don't think so. I prefer regular or lemon martinis. Or just plain old fermented grapes!

Hey did your Croque Monsieur from Ina taste like those in Paris??? I cannot find a place or recipe that compares. But if hers does, I should give it a go! Oh how I love them. But I cannot find strong Dijon like they have in the Paris cafes either. I try and buy and buy and try but to no avail. Nothing is equivalent here.

A friend of me gve me a recipe for pumpkintinis last Thanksgiving that was delicious...no graham crackers involved. You blend 2 c pumpkin pie filling, 1/4 c condensed mild, 1/2 c heav cream with some cinnamon, nutmeg and cayenne. In your shaker mix 1 1/2 oz vanilla vodka with 1/2 ounce frangelica. Mix in some (3 oz) of the puree and top with a little whipped cream and cinnamon!

See, now that sounds good - cayenne, vanilla vodka, and frangelica? And I like that you blend it - my cocktail shaker is not my friend. I might give this a try...