YAY! WEDNESDAY! Oh Yeah, It's Back!

Oh, I’m well aware of how many weeks it has been since I’ve covered the NYT Dining section. The reasons why aren’t terribly complicated: 1) I’ve been ridiculously swamped with all things life-related, and 2) I have been horribly uninspired by the Dining section lately. Really. The recipes have been blah, the restaurant coverage has been blah…as you can tell, I’m not so concerned with burning bridges with Frank Bruni. Do you have any idea how much would have to happen before someone like me came on his radar? Yeah, I’m not concerned in the least.

Anyhoo, this is the week where it finally came back together, and I just pored over every inch of the paper. Needless to say, they caught my attention with this picture on the front page:

Shazam! As you’ve probably guessed, the article was about heritage turkeys and trying to preserve not only certain breeds of turkeys but also preserve the integrity of the term “heritage.” The article’s author, Kim Severson, told one farmer’s story; the farmer is the preeminent heritage turkey farmer in the country, and there are several mentions of how much he loves his turkeys. It’s funny – I’ve heard this about turkey farmers before. Likewise, an article about buffaloes several weeks ago talked about the same thing – how attached to the animals these farmers are. I find this fascinating. Clearly I am so out-of-the-loop with Mother Nature. I can’t imagine being so attached to an animal or “the land.” I feel a sense of detachment, lack of understanding, and…indifference, perhaps. Definitely not good. But what to do? Leave my 17th floor apartment in NYC and go live off the land? That hardly seems reasonable or realistic. So the question becomes how do I find the sense of the natural in the city? And I don’t think I can argue that Union Square and Central Park do it for me, as I have said for the 7 months I’ve lived here. Because when it gets down to it, for the long haul, Union Square and Central Park don’t come close.

I was also struck by this photo on the front page as well: 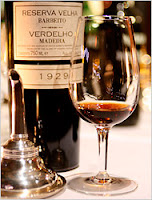 I'm telling you: the front page was eye candy! This picture was advertising an interesting article on Madeira and that River Café is selling some of their most highly coveted bottles.

Frank Bruni wrote an unexpectedly funny article about patronizing language use by restaurant staff - we've all heard the phrases he mentions ("Pardon my reach"...so why the hell don't you just say "Excuse me"???). I won't say anything else about it because there's no way I can adequately sum up Bruni's delicious smugness. Just go read it for a good snicker.

Calling all chocolate lovers! Read here for the most delicious places in NYC to get that high. Our country may have its puritanical roots, but thank goodness for the hedonistic pleasures of chocolate and coffee. How else are we to get through the daily grind?

And recipes! Oh, yes, there are recipes! Check out two: Pan-Fried Pizza and Bacon Topped Meatloaf Burgers. Mouth watering much? But I do approach these recipes with trepidation. First, I have a real hate-hate relationship with pizza dough. That stuff is just gosh-darned sticky and difficult - I have never found a pizza dough I've liked. Especially since the husband can get this thin crust at Chelsea Market on his way home and save me such a huge headache. It's not even that bread-y, heavy crust - it's that light as air stuff that crisps up 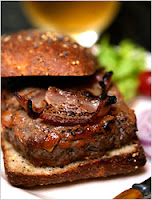 so beautifully. So I have to wonder if this is worth the trouble on a Thursday night when we're trying to get the kiddo bathed and in bed, you know? As far as the burgers are concerned, they sound delectable, but the author, Melissa Clark, seemed to take out a lot of ingredients that makes meatloaf...you know...meatloaf. No eggs and breadcrumbs?! And the ketchup, Worcestershire sauce, and onions added at a glaze at the end?! Not in the meatloaf?! I don't know - it just seemed like an awful lot of blaspheming going on there. But since I don't tend to be offended by blasphemy...I'll add this recipe to my repertoire.

See? Told you it was a good section this week.