Continuing my All Ina All Week thread, here was Tuesday night's dinner: Bay Scallop Gratin.  Here is the result: 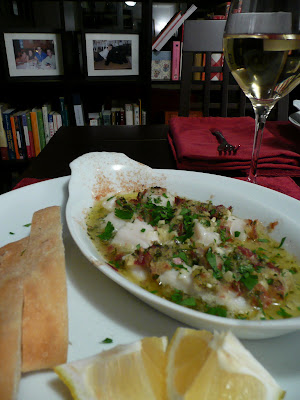 As I mentioned before, my local fish monger only had sea scallops but Ina said you can use those and just quarter them - that worked great.  Ina asks for a tablespoon of Pernod, but I didn't have any Pernod on hand so I just used white wine instead - I have 2-3 recipes that call for Pernod...and even then, each recipe only calls for 1-2 tbsp of it.  And I can't justify a $25 bottle of liquor for that, especially when substituting wine works great.  So no Pernod.
My last comment is that I don't feel like my topping got crispy and toasted enough.  What happened was that I needed to put it under the broiler for two minutes, per Ina's instruction.  But I got jumpy - I've destroyed soooooo many things under that damn broiler.  It's an inferno from which few dishes have survived.  So I turned the setting to "low" instead of "high."  It was under there for 3 minutes, and I was still unhappy with the topping.  However, I was fearful that I was going to waaaaay overcook the scallops.  So you have the photo above.
We had a fun time debating which was better: the scallops themselves...or the bread dipped in the juices*.  It was a toss-up.  Overall, it was another success: the flavor was rich without being cloying (yay, lemon!) and the portions were the perfect size.  It was immensely satisfying.
Eat, drink, and all hail Ina!
* Ina called for a crusty French bread, but I used the fresh ciabatta I had on hand.  It worked swell.
NOTE: In the dish and with dinner, I used Mezzacorona 2007 Chardonnay from Italy (specifically in the foothills of the Dolomites).  While it was fairly oaky on its own, it was balanced and light with the dish.  Great pairing.
Posted by Unknown at 5.11.08

Looks beautiful to me! I know what you mean about the broiler. It can be tricky. You have to check every minute. I am getting better with it after many many many years.

I just made this dish too but it was less of a success for me :( I linked to you in my post. You have a great blog!

Thanks for the comment! I will definitely give this a shot again... maybe I was put off by the extra crispiness from my broiling incident!