So two weeks ago was the NCTE conference, followed by the ALAN workshop. As I mentioned here, it was my first conference in my new job so I was nervous and excited and nauseous building up to the big event (come to think of it, I felt that way during the event too).

I'm happy to report that the conference was a fantastic experience, and I had little reason to worry; some hiccups aside, everything went fairly smooth, I think. Here were some highlights:


Lastly, the biggest highlight of the conference for me was our HarperCollins "family dinner" at Osteria. We had it at the "chef's table"...which, seriously, is a huge square butcher block table in a private room off the kitchen. You walk through the prep station to get to it. Around the table are sorbet machines, pastry blenders...the server said the table is actually where they make their pasta every day. The staff had lit candles all around and were playing "Italian pop music." And the food? Oooooh, the food. Superb in every way. Not only was this a highlight for the conference and my job thus far...it was a culinary highlight of my life, truly. An added bonus? Morimoto (!) actually poked his head in briefly to check out the space and we later saw him eating in the main dining room! Apparently he and the owners of Osteria are friends. And here are two subpar photos I took with my phone: 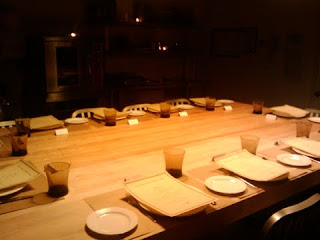 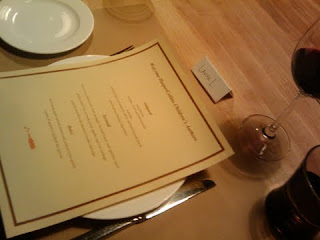 And did I take a moment during the dinner to reflect, like I said I would? Yes, I did. There was a minute or two when I was out of the conversations going on around me. I looked around at the table, watching everyone engaged in conversation, eating and drinking, everything aglow in candlelight. I loved that I had a part in making it happen, and I loved that food and drink allowed us all to slow down and enjoy each other. It would not be exaggerating to say that it was one of the best moments of my adult life, as it was professionally, creatively, and emotionally satisfying.

Eat, drink, and cheers to all of you - for sitting at my table (the blog, of course), for stopping by the booth to see me, and for taking this journey with me. You are so appreciated!

Now you've got me all sniffly! And I wasn't even there!

Yes, that was me who stopped by! I was happy to meet you in person while going around the exhibits. I also got to meet and speak with Matt Phelan, and I was actually back at your both to meet Peter Mccarty! That was such a treat... I got a broadsheet signed and the ARC for "Henry in love." I got to hear him speak too, at one of the sessions along with Amy Bates. Anyway, it was lovely meeting you! And congratulations, Laura, you did a terrific job!
:-)

Sounds great, Laura! Congrats on making it through and making it happen!

Wow. It all sounds completely wonderful. Thanks for sharing it here.