Another One Where I Talk About the NYT Dining Section

The NYT Dining section has been doing this sort of annoying thing lately (to me, anyway) where they’re reviewing the best restaurants in the country. Naturally, I find it annoying because it doesn’t interest me and everyone knows it’s all about me, right? Nevertheless, you should know about this so you can check it out, if you want. For now, though, onward…

The Letters section was actually pretty interesting. Last week there was an article on MSG that almost accused MSG-related migraine sufferers of imagining the whole thing. Of course, a couple of letters grumbled about that. And two letters were related to the octopus article – you know, the octopus recipe that I was dying to try. One person actually spent time in Mykonos so, of course, he had had the real thing off the boat, beaten against a rock, and grilled on an open fire. Well, dur! Of course that’s going to taste better than octopus prepared in my crappy 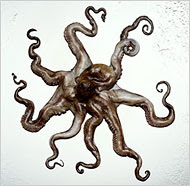 NY kitchen! Then another letter was from a woman who had seen the gorgeous creatures while scuba diving in the Caymans and questioned whether octopus was worth eating when it was so beautiful...not to mention that, if you have to do that much to a thing to make it suitable for eating, isn’t that a sign that maybe we shouldn’t eat it? I don’t know, perhaps I have no conscious, or perhaps I’m too simple-minded, or perhaps I’m cavalier…but I just don’t really care. For the most part, I have had an immensely enjoyable experience every time I’ve had squid. And that’s enough for me. Environmentally, ethically irresponsible? Sure, I suppose you could argue that. But isn’t nearly everything we parasitic humans are doing these days environmentally irresponsible? Oh goodness, I am so digressing…

I’ve been trying for months to get a decent reservation time at Blue Hill to no avail. Apparently now, thanks to TableXchange, I can purchase one! They cost anywhere from $15 to $40, sort of like eBay without bidding. There’s another website, PrimeTime Tables where you pay a $500 annual membership fee (!) and even then you play $45 per reservation. This is irking the restaurateurs because now they’re getting more no-shows and, probably more importantly, they can’t manage the quality of people getting into their restaurant. Now anybody can get in! The most popular restaurants in the country are now open for the masses! Hell, it’s anarchy! I can see where the restaurateurs are coming from but, on the other hand, this is American enterprise and capitalism at work. It’s the nature of the beast. Now some restaurateurs are saying that, if they know a reservation was made by a TableXchange customer, they won’t honor it. I do find this whole issue interesting, but it’s also part of the reason why I prefer home cooking to going out. I want an experience. I don’t want this cutthroat, bragging rights, showing off, competitive part. Or if I do want to go out, I’d rather go to a mid-level restaurant where I can manage a decent reservation time if I call on a Tuesday or Wednesday beforehand: Fig and Olive, Home, Gaby (in the Sofitel Hotel and some of the best food I’ve had in NYC). That’s much more enjoyable and less pretentious to me. I loathe pretension.

I am going to go back to the whole restaurant thing, very briefly. The restaurant reviewed on the first page – Fearing’s in Dallas – has a dish that looks and sounds like a plate of heaven: Buffalo marinated in maple syrup and peppercorns. Not bad, eh? I’d pout that I have to go to Dallas to try it, but the Union Square greenmarket has a guy who sells really good buffalo. I might have to try to create my own recipe…

And that’s the news this week. Stay tuned for more next week!

EDIT: I have to rescind my comment that "I just really don't care." That's totally inaccurate, and I feel bad for saying it. The truth is that I care very much. However, there are a lot of battles to be fought out there in the search for sustainable, organic, and local food...and this is just one I don't feel like fighting. Certainly not enough to compel me to write the Times. Not to mention that I made such a fuss over this woman's letter...and I see they didn't even include it in the online version of that section. So this is all a moot point anyway...
Posted by Unknown at 13.3.08