The One Where I Re-Create Fig and Olive's Fennel Dish 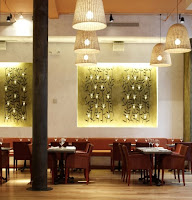 My soul twin/BFF/partner-in-crime came for a visit last weekend, and we had a proper night out on the town: a 3 ½ hour dinner at Fig and Olive, drinks at The Campbell Apartment, dancing down the street and curtsying to passers-by after one cocktail too many,

the Chrysler building (or “the chandelier building”, as my BFF calls it) twinkling in the background. Completely fabulous.

At Fig and Olive, we had the Grilled Fennel with Lemon and Rosemary and I truly don’t know if I can find the words to express its wondrousness. The texture was perfection – cooked through but still resisted a bit when we bit into it. The flavors were complex – the anise, obviously, was predominant, as was the rosemary, but there was something else in there. What was that flavor? What is that? And the fennel was sliced super thin with that pale cream color. Where were the grill marks? It drove us to the brink, trying to figure out how it was done. We asked our adorable server, but he said, “Maybe the chef grilled it whole and peeled away the outer layers.” Hmm…perhaps. But then how did it get sliced so thin once it was cooked? Our server also told us there was “a touch” of grapefruit juice. Hmm…really? Intriguing… Analysis aside, there were gorgeous moments when my BFF and I would take a bite, close our eyes, and sit in orgasmic silence. Wow. 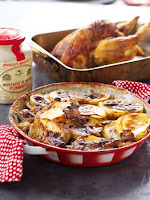 Naturally, I had to try to make it on my own. Last night, I made Nigella Lawson’s Potato and Mushroom Gratin. It was so simple and so delicious, especially since I was able to improv a bit with the ingredients I had on hand: I used red new potatoes instead of the “baking potatoes” Nigella calls for. I also couldn’t find any cremini mushrooms so I used baby portabellas instead. Now the dish was fine on its own, but it could be fabu with bacon. Or maybe even a blue cheese crumbled on top before serving. I dolloped some crème fraîche on it, and that was perfection.

So the fennel…well, I put the whole bulb in a baking dish, rubbed it with 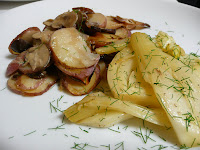 oil, salt, and pepper, and baked it at 425 for 40 minutes. I had to do it for only 40 minutes because that’s how much time I had left for the gratin. When the fennel came out, I peeled the outer layers away and did a pretty decent job of slicing it thinly. But it definitely was underdone. So I sauteed it in olive oil and lemon juice for about 20 minutes (while my gratin just sat in a 200° oven. Unfortunately, that still wasn’t enough time, and it was definitely too crunchy still. And I forgot the rosemary. So I’m chalking this up as a failure, even though I still enjoyed it and ate every bite. I consider it a failure because I didn’t have the outcome I was trying for. It’s back to the drawing board.

I just wish I was somebody in the food world, and I could go into the kitchen at Fig and Olive and find out how it’s done! Anyone know anyone who can get me in?
Posted by Unknown at 13.3.08

I still cry remembering that night.