A Nibble of This and That

I was a tad more eager than usual for this week’s NYT Dining section because I was really curious to see the Letters section re: last week’s “The Fat Pack Wonders if the Party’s Over” by Kim Severson. Alas, no Letters section in the physical paper and no section in the online version. Not one that I could find, anyway. No one had anything to say, that was printable, about that article? Really? I was hoping for some great discourse and was totally disappointed to not get it. 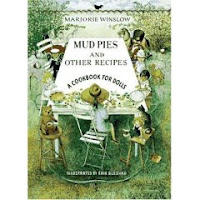 Once again I find that combining food and children’s literature in a single blog isn’t entirely random. Check out Allison’s post over at Shelftalker about Mud Pies and Other Recipes: A Cookbook for Dolls written by Marjorie Winslow and illustrated by Erik Blegvad. Allison has included a couple of the “recipes” in her post and it sounds so “completely and utterly charming.” I’ve put a hold request on the one single copy at Queens Library.

As part of the prerequisites for NYU’s Food Studies program, they require you to have some hands-on experience that extends beyond your own home kitchen. So I’m looking through the course schedule at the Institute of Culinary Education (aka ICE) with absolute delight. A Greenmarket cooking class! A knife class! A “Fine Cooking” class! A salt class! Where to start???? I’m thinking of the knife class – it’s only a 3-hour class I can take after work so I don’t have to worry about too much commitment at this point. If it goes well, I can do the “Fine Cooking” class, which is much more money and five 5-hour classes. Between those two classes, I will have satisfied the prerequisite. I’m on my way!

I recently heard about the journal Gastronomica and thought a subscription might be in order. So I went to the website to check it out and read an intriguing letter from the editor that is in a similar vein to our earlier discussion about NYT’s “Fat Pack” article. She discusses the juxtaposition of providing healthy, delicious, affordable food to disadvantaged families and communities with the idea that good food – or any food, really – should cost more. Those ideas seem completely contradictory to each other. She’s right, though: I live in a lovely part of Queens with decent restaurants, a fish monger, a cheese store, and a great market for my other needs. And I spend a significant portion of my income on food. But I work in a disadvantaged neighborhood, right across the street from the bus depot, and it is incredibly difficult to find healthy food around here. I usually bring my lunch to work but, occasionally, I’ll forget and need to buy lunch here. You wouldn’t believe the difficulty in doing that. There’s a market nearby, but the produce is sub-par and comes from everywhere but New York. Forget good bread or any unprocessed cheese. Everything comes frozen, in a can, in bulk, or vaccuum-packed. Not surprisingly, you’ll see a significantly larger number of overweight and obese people in the neighborhood I work in as opposed to the one I live in. During my info session, the director of the Food Studies program repeatedly threw around the term “food crisis in this country” and I don’t think that’s stating it too strongly. Darra Goldstein’s letter just added one more voice to the dull roar. 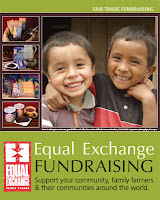 On that note, the Sustainable Table has a wonderful blog and they posted about a curriculum package by Equal Exchange. It teaches kids about fair trade, food production and sustainable living. This seems as good a place as any to start turning this thing around.

Laura, I find it so interesting how you talk about the different neighborhoods and the kind of food available there. My mom and I often discuss how in earlier historical period of time (yesteryear, times of yore etc...) you could tell if an individual had money based on his girth. Heavier people showed signs of wealth and living well. Thin people were poor and hungry. Now it is opposite. I see wealthy areas and communities here with such an abundance of great food and restaurants plus they are the ones with time to work out and have others clean their home or watch their children etc... But good protein and vegetables do cost more. Fast food is cheap.

Your whole post reminded me of an email I got a few months ago. It depicted a photo of several families from different countries and what they ate in a week and the cost of the food. It was eye opening and so very interesting. I am going to add it as a post to my blog if you care to take a look:
http://artandaioli.blogspot.com/

Happy Weekend to you!

This is the first time I've posted here and just wanted to say I really enjoyed reading your blog. So cool that you work in a library. I've often thought I should have been a librarian in another life -- one of my favorite places on earth, a library is.