Children, learn from my mistakes

I had a hideous kitchen adventure last night that completely irked me. Remember I talked about buying The French Market by Joanne Harris and Fran Warde? Well, last night I made a recipe from it: Monkfish with Chanterelles. Only there aren’t chanterelles to be had this time of year so Adam bought baby portabellas instead. And this is where I made a gargantuan mistake: I bought the monkfish from Fresh Direct. I know, I know. It was completely asinine of me. Especially when Adam works across the street from Chelsea Market and could go to the fish monger there. And there’s actually a very nice fish monger, Forest Hills Fishery, just down the street from me. I can only claim laziness in its basest form.

So I get the fish, wrapped up in paper and sitting in a Styrofoam tray, from the refrigerator. The first thing I notice is that there’s a ridiculous amount of fish for just me and Adam. Fresh Direct screwed up and gave me 2 lbs. rather than 1 lb. So the fish ended up costing me $30. No biggie – 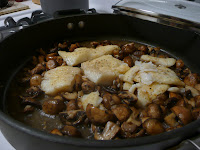 I’ll just freeze half of it. I unwrap it all and think to myself that the filets are awfully thin for monkfish; they didn't seem to have monkfish's typically firm texture or pink color. But I push the thought aside and cook it, searing it for one minute on each side, as the recipe dictates. And the fish is nearly fully cooked and just falls apart on me as I transfer it to a plate. What??? Okay, monkfish, the “poor man’s lobster”, most definitely does not behave that way. It should not have flaked apart like that. Hmmm…I don’t think this is monkfish. Needless to say, the taste and texture confirmed it. I’m all irritated with Fresh Direct but, really, it’s my own fault. This is what laziness about my food will get me: really expensive monkfish-that’s-really-more-like-cod. My only remaining issue is whether Fresh Direct knowingly jacked me (twice!) or if this was an honest mistake*. 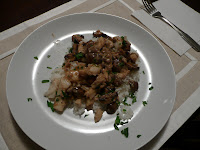 The meal ended up not being too bad, but the flavors and textures were rather odd together. The recipe says that the fish and mushrooms can be served over rice, steamed potatoes, or shell pasta. I chose to serve the mushrooms and non-monkfish over rice, but portabellas have such a deep, earthbound flavor that they didn’t mesh well with the rice – it would have been more successful over steamed fingerlings. The non-monkfish didn’t help – it’s extremely light, flaky texture and flavor were a poor match with the portabellas. Oyster mushrooms would have been nice with the cod-like fish.

You know, as a full-time working parent, I need to take shortcuts while cooking on the weekdays. But now I know that taking a shortcut in the selection of my ingredients is not the way to go. Especially for such a fresh, simple recipe. I was left feeling like a schmuck for making such a novice mistake. Kids, don’t try this at home.


* Epilogue: Adam emailed Fresh Direct and they refunded us the full $30.00 for the non-monkfish.