Our vacation had a number of legs to it:

2) All three of us at my parents’ house;

3) Kiddo at my parents’ house while Adam and I were in for three days;

4) I fly back to NYC alone and Adam stays in for two more days, working in ;

5) Adam and I are in NYC for a week sans Kiddo;

6) My mom flies Kiddo back to NYC and stays three days;

7) My mom leaves and it’s just the three of us again.

Do you have any idea how many one-way tickets we had to buy to make this all happen???? Ah, but it was so worth it. We had a glorious time.

After many tears and stress leaving Kiddo with my family, we drove the short distance to our friends’ house on the border: Amy and Lisa, of Simple Things Made Great and The Great Malaise, respectively. They have a daughter who is beyond darlingness and helped me feel better about leaving my own girl behind. Knowing that we’d need a “post-family cocktail”, Lisa had drinks waiting: Lillet and seltzer over ice with a slice of lemon. Aaaaaaah, yeah. That is now my go-to summer refresher.

Amy and Lisa have truly made an oasis in the middle of the city: classic details in their home with everything updated that needs to be, a lovely patio complete with BBQ and a patch of grass, music always playing. Amy arrived home and, while we read stories to their daughter, they created the perfect summer patio meal: marinated chicken (I believe it was chicken…it’s been awhile now…), an orzo-esque pasta that had a playful texture compared to the meat and the vegetables. It was refreshing and satisfying, and there was the right amount so that we were content but not overstuffed. Amy, consider this a public plea for the recipe… 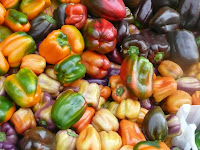 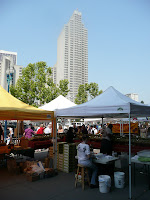 Amy is currently taking a course to be a Certified Sommelier (because she’s a rock star) so Lisa took us into “The City” for a Food Extravaganza. We started off at The Ferry Building and the farmers’ market outside. Unfortunately, since we were leaving the next day, we couldn’t buy anything perishable – I nearly cried bypassing the cheeses, the squash blossoms, the nectarines, the heirloom tomatoes. Lisa introduced us to Blue Bottle Coffee Co., which was on par with : we were immediately smitten. We ate at Boccalone and shared one of their “cones”, which is literally a paper 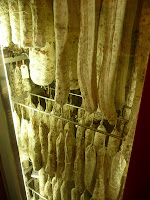 snowcone cup, filled with the day’s selection of three meats. Adam eyed their fridge filled with cured meats, drooling, wishing that we were instantly rich so that he could install one in our apartment. We longingly passed up the Cowgirl Creamery, knowing that cheese would be difficult to transport home. We bought pluot butter and the freshest trail mix EVER from the purveyor outside. It was all so decadent and deliciously overwhelming. 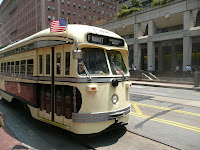 At that point, Lisa had an errand to run so we headed up to the Mission District (San Francisco actually has fantastic public transportation…which I kept pointing out to Adam in an attempt to convince him that we could move back to the West Coast…someday). Um, and the Mission District is fantastic. It’s the Chelsea NYC of San Francisco. Lisa took us to a darling café, which I can’t remember the name of, where I had some mighty powerful sangria and we just sat against an ivy-strewn wall next to the sidewalk and watched everything go by. Perfection. How did Lisa know that people-watching and drinking sangria are two of my favorite things to do in the summer? 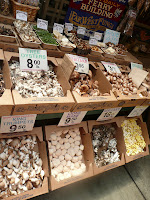 But then I stood up. I foolishly didn’t have anything to eat…and WOO! I felt that sangria! So we headed to a local taco place – which, crap-a-lacka, I can’t remember the same of that place either. Alas, we were hoping for a respite from the heat because The City was uncharacteristically hot that day, but it wasn’t meant to be: the taco place was unairconditioned, for heavens’ sake. So Adam bought four bottles of water and we half-heartedly ate our tacos, just so we could say we tried them. On our way back to the train, we passed gorgeous murals, cute buildings, and lots of great-looking restaurants and cafes. Yeah, I really think I could live there. 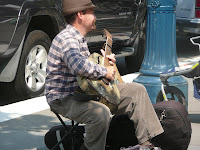 From there, it was back to to worship at the House of Alice Waters, otherwise known as Chez Panisse. I have no pictures to show you because, you know, that would be sacrilege to snap-snap-snap away on such hallowed ground…not to mention that it would bother other diners and interrupt our conversation flow. Unfortunately, I can’t relate too much, as it’s been a rather long time since we were even there. We ate upstairs in the café because it takes a lifetime, and your unborn child, to get a rezzie in the downstairs section. No matter, I’m more of a café person anyway. Adam (and I believe Amy as well) had salads for a starter with local goat cheese – everything on the menu had its provenance listed. Lisa and I split a pizzette that was perfectly crisped and flavorful. Adam and Amy had the duck for dinner, with the most expertly-done crispy skin I have ever experienced, with a juicy interior that just melted like buttah in your mouth. Adam accused me of being unimaginative (okay, Mr. Salad-with-Goat-Cheese), but I had the grass-fed local steak, rare, with the batter-fried onions. Ooooooh. It was fabulosa. Lisa had the salmon which, curiously, I didn’t ask her if I could try it. She had nothing but great things to say about it. In the meantime, our service was impeccable and the open kitchen was a joy to watch: with the fresh, seasonal, local ingredients, the kitchen staff only had to do what was necessary to enhance the dishes so there was this Zen-ness to their movements and preparation that was a joy to watch and, I believe, permeated throughout the room so that all the diners felt it. Dessert entailed a local peach tart for me and Adam and affogato for Lisa and Amy. Overall, it was heavenly and wonderful and everything I had hoped for. A pinnacle, truly.

Thus ended the leg of our adventure. The next day, Adam drove off to , while I nearly missed my plane since I messed up the times in my head. It was the only time in my life, thus far, that I was relieved to have my flight delayed by two hours: it is the only reason I was actually able to make the flight.

Eat, drink, and say goodbye to for the time being

I can't believe that I didn't share my salmon!!! How rude!

You should also try Pastis as a summer drink. We served it for the first time this weekend and it was a hit. It's completely different from Lillet, but just as groovy in its own way.

It is cracking me up that you put "the city" in parenthesis.