I was browsing through my Picasa folders and I found this: 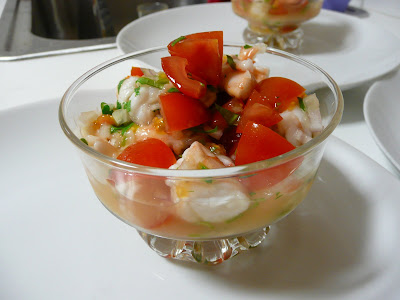 Helloooooo, summer!
This was the ceviche I made last summer, actually, and forgot to blog it.  Thanks to running with tweezers for the recipe - it was fantastic.  She says you can use catfish, but we used shrimp since that's about the only seafood Bug will eat.  But doesn't this just look like summer personified?  With chips, a mojito or a cerveza, sitting on the balcony (or in your yard for you suburban dwellers), listening to some summer-esque tunes...
Which makes me think about another of my playlists: "Barcelona".  Now, I don't think a single one of these songs is actually sung by someone from Spain.  Nevertheless, it evokes a mood and I play the list interchangeably when we eat Spanish, Latin, or South American cuisine.  Here is a sampling:
Eat, drink, and get ready for warmer days!
NOTE: You guys, I still couldn't get the accents right.  I didn't have an "option" key on my keyboard and every time I did the alt key and the "e", I kept getting that "thunk" error sound.  I'll keep trying...
Posted by Unknown at 19.4.09

If you want warm days you should try it here the last couple. OUCH! Sooo hot! Near 100! But I do love ceviche and the temps are perfect at the beach!