I know I've been posting a lot of food lately and thanks to all my bookish friends for being patient. I've actually written three posts in the last two weeks about work and books and life...but I couldn't quite write them in a way that was...uncontroversial. So until I figure it out, I'll talk about food.
Last weekend was glutinous. On Saturday night, thanks to Eatery Row: Forest Hills, we discovered the local joy which is Manor Oktoberfest. I ate every bite of an enormous bratwurst and drank a whole pint of my new favorite lager, Kostritzer. Sunday morning started with poached eggs and potatoes fried in duck fat for breakfast. Sunday night ended with Boeuf Bourguignon. It was worth it but, by Sunday night, we were drinking lemon ginger tea to help our digestion and popping Tums.
So this was a cleansing week. On Tuesday night, I made Chicken Noodle Soup from my new cookbook, Simple Chinese Cooking by Kylie Kwong (a Christmas present from MC [mother-in-law] and her husband). I had to make some minor alterations but here is how it turned out: 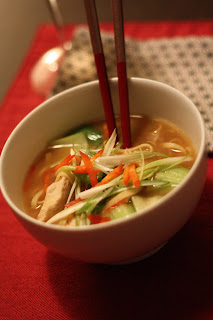 Chicken Noodle Soup
(a variation on the recipe from Kylie Kwong)
1/2 bunch bok choy
9 oz. package fresh linguine noodles (Buitoni brand is available in most grocery stores)
6 cups low-sodium chicken stock
2 tbsp low-sodium soy sauce
1 tbsp ginger julienne
2 tsp oyster sauce
1 tsp white sugar
13 oz free-range chicken breasts, cut widthways into 1/2 in. slices
1 tsp sesame oil
1/2 scallion julienne
1 red jalapeno, finely sliced on the diagonal
Remove cores from bok choy, cut crossways into 4, then wash thoroughly and drain.
Place noodles in a colander and rinse well under hot running water, then drain.
Bring stock to a boil in a large heavy-based pot. Add soy sauce, ginger, oyster sauce, and sugar and stir to combine. Reduce heat, add drained noodles and simmer gently for 30 seconds. Add bok choy and chicken (yes, raw) and simmer for a further 2 minutes or until chicken is just cooked through (took about 5 minutes with my soup). Stir in sesame oil, then remove pot from stove.
Ladle soup into large bowls. Place scallion and pepper in a separate bowl alongside the soup or do as I did and just sprinkle over soup as garnish.
This also turned out to be a super kid-friendly meal since I just gave Bug the broth and noodles. You could also make it vegetarian by omitting the chicken and use vegetable broth instead. The soup had a bright flavor and it was so cleansing and fresh after all the heavy winter food I had been eating! 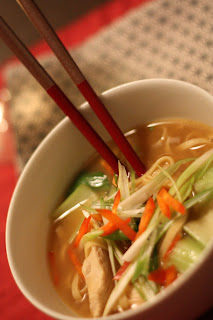 Eat, drink, and don't prescribe to the idea that winter only means heavy foods!
Posted by Unknown at 28.1.10

ohhh that sounds so yum.

Hi Laura - i love your blog and would love to interview your about your marketing role at Harper collins. I run a marketing blog for authors at www.faeriality.blogspot.com Let me know if you are interested :)

Shelli, I'll email you offline - I know your blog well - it's in my reader!

Majorie, it totally was yum! It was a nice break from all the heavy stews and pastas I've been having...but it was still all warm and comforting too.