Can you believe this is the very first Julia Child recipe I've made? It's fitting that it should be the first, don't you think? Though, I have to confess, that I felt like such a cliche when I said to the guy at Chelsea Wine Vault, "I need two bottles of Chianti to make Julia Child's Boeuf Bourguignon." Yeah, yeah, isn't everyone making it?
Off the bat, I had a problem: I don't own Mastering the Art of French Cooking. But that is what the interwebs are for. So this is the recipe I used. But there just seemed to be details missing. First, "sliced" carrots and onions. Thin? Fat? What? And what about the "mashed" garlic? Mashed, as in slammed under my chef's knife? Or mashed, as in rubbed with salt and made into a paste? I put in 4 cloves (only 2? Puh-leeze) and just smashed 'em under my knife. And "small white onions"? Like pearl onions? Or just small white onions - I found some non-pearl ones at Union Square that were about the size of large shallots. Overall, I was not happy about the lack of detail. Those of you who own MtAoFC, can you confirm that Julia includes more detail? Wasn't she known for detail? Ack!
That said, it all turned out okay. While the recipe took forever, it still wasn't incredibly difficult. Don't confuse lots of steps with being very difficult. Because this was nearly a one-pot meal, it didn't take a lot of coordination and, while it sat in the oven for 3 hours, I played Guitar Hero and watched the Jets lose to the Colts. Does that sound like a woman who slaved away in the kitchen?
Behold, the photos: 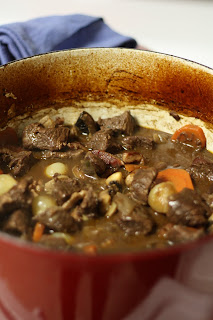 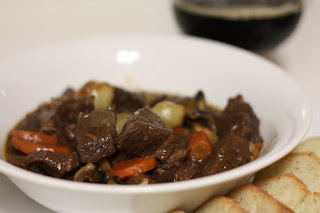 Some notes:
It was worth every minute. It tasted like earth and herbs and winter and mud. In the best way possible.
But that doesn't mean Julia is going to get me to try those nasty aspics.
Eat, drink, and hurry up before spring gets here!
Posted by Unknown at 25.1.10

Mmmmmmm. I can smell that from here. Love Boeuf Bourguignon. I confess to having made it before, but not with Julia's recipe, which always looked intimidating. Thanks for the tips.

Go You! I love that you told the wine guy anyway.

Re: the many steps to prepare a classic French recipe, I recall the same with coq au vin made in notre classe de français. It involved like four steps, browning, poaching, braising, steaming, freaking fondue-ing. But damnnn it was good.

I don't have the book either. I have always eschewed cookbooks, especially all-in-one-ers like hers (I fear too much access will stifle my creativity), but Lisa called up Julia's french egg clip on YouTube and our life quality bumped up a notch. I'll never make scrambled eggs again.

Darn, i was really hoping one of your 2 comments was going to be someone with the cookbook - I am dying to know if she is detailed in the book or not. This dish looks great, I will try it, but would love to get my hands on that original recipe!! Have you since found out if her's gave the details questioned?

Amy, you and Adam are two peas in a pod - he LOATHES recipes. A lack of a recipe stresses me the hell out!

Erika, no one has confirmed this yet - I thought a lot more people would have the book. The Soul Twin (my best friend) has it so I could call her. But we're actually going to the bookstore today - I might just buy the damn thing. It's really ridiculous that I don't have it!

I have the cookbook and unfortunately she does leave out some of those details. I definitely had a few questions - how thinly to slice the vegetables? Since they were to be browned, I decided to slice them thinly. I also had no idea what bacon rind was, so I just cut my bacon into the lardons, then blanched and fryed the whole batch. It's in the oven now, but I think it will turn out ok one way or the other!