Guess who went to the Union Square Greenmarket this morning! Yep, ME! I haven’t been in months – I hate to admit that I’m a fair-weather market-goer. But I was glad I waited because, instead of the sparse winter offerings, I was greeted by flowers and purveyors galore. Which naturally also meant people galore. I don’t know what it was about today, but there seemed to be very few accent-less Americans there – I heard lots of French, lots of Brits, lots of Swedes and Germans. Where did all the Americans go? That’s right – I heard quite a few of them saying they were going to Trader Joe’s a few blocks away. ACK! Why go to Trader Joe’s or Whole Foods when you have everything right here?! Bread, fruit, eggs, meat, jams, honey, syrup, cheese, flowers, herbs. Is there anything else? Curse corporate for setting up so close to the market! 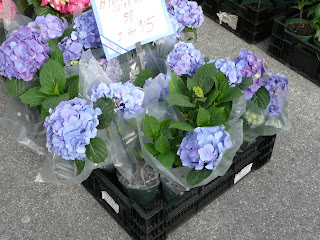 The first hydrangeas of the season! Swoon! 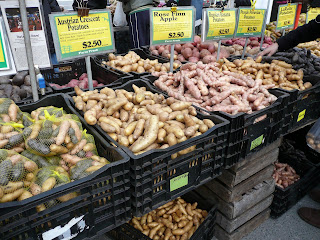 Potatoes a-plenty...the fruits of late-spring and summer will have to wait a bit longer. Months ago, my mom-in-law, Adam, and I actually bought several different varieties of the potatoes and did a taste test. Not surprisingly, the delicate fingerling was our favorite. 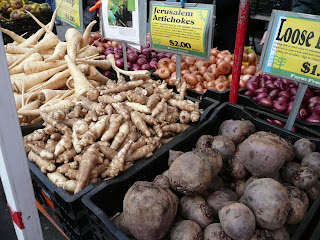 I'm over parsnips - I've had way too many this winter. But I was happy to see Jerusalem artichokes. See, I have lots of recipes that call for them...but up until today I had no idea what these looked like uncooked and no idea where to find them. So I bagged a half-dozen of them and I'll experiment. 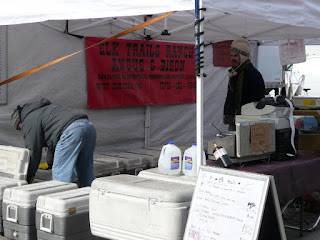 These guys are the best: Elk Trails Ranch. They carry beef and bison products, including doggie treats and jerky. The guys are super-friendly (which, surprisingly, isn't always the case at certain market stalls) and they'll answer your questions. Today I wanted to change up from the usual bison sirloin and flatirons I normally buy. So I bought a "delmonico", which I was told is akin to a beef ribeye. Can't wait to try it! 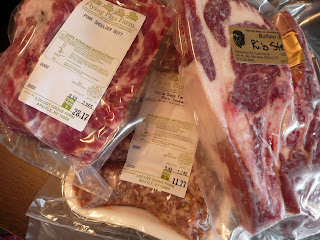 In addition to the bison ribeyes, I also stopped by Flying Pigs Farm's stand. Based on the Amateur Gourmet's recommendation, I bought a HUGE pork shoulder and I'm hoping to braise it tomorrow and serve it with my new gratin Dauphinois recipe from My French Kitchen. Not exactly spring-y, I know, but it just sounded so darn gooood. I also bought Apple Sage pork sausage for breakfast tomorrow. 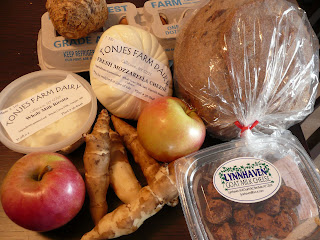 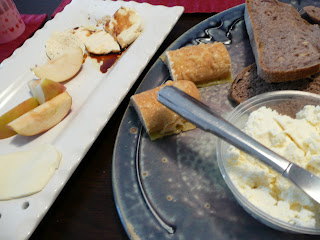 And here was the best lunch ever. The mozzarella was substantial with a melting quality, and the ricotta spread like cream cheese on the olive rosemary walnut bread. Those two other pieces of bread were organic cheese sticks I bought as well - they were a tad on the dry side, but the tang of the cheese struck the perfect tone. The apples were a tad overripe but, given the perfect sweetness, I happily overlooked it. The cocoa chèvre was okay: they mixed the cocoa into the cheese, along with powdered sugar so it was verrrry sweet and dark brown throughout. I might buy some goat cheese and try to make my own with just balls of cheese rolled in cocoa powder. That way you'd get the contrast of the white cheese with the chocolate exterior. And it wouldn't be so sugar-sweet. Nevertheless, can you imagine a more perfect lunch than this on the first weekend of a new season?

Happy spring and bon appètit!
Posted by Unknown at 22.3.08

Celeriac is great in stuffing or slaw of all kinds. I especially like it pared with apples or cranberries.

I had some leftover gratin Dauphinois that I needed to use so I cut the celeriac the same size as the potato slices and sauteed them in olive oil, butter, garlic, salt and pepper. Once the slices were softened and tinged with gold, I put the gratin leftovers in the same pan and warmed through. Without looking closely, you couldn't tell what was potato and what was celeriac, which made for some very surprising bites. You'd think it was a bite of potato and then - zing! - it was celeriac! I don't know if I'd prepare them this away again but it was fun experimenting, nevertheless.