The One Where I Review From Here, You Can't See Paris 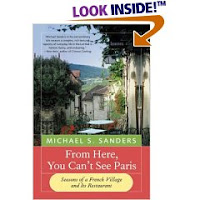 From Here You Can't See Paris: seasons of a French village and its restaurant
Michael S. Sanders
Harpercollins, 2002

I'll state outright that I got everything I wanted out of From Here, You Can't See Paris. I wanted to do a little armchair traveling, and I wanted to feel, by the end of the book, that I had soaked up some French culture. On the other hand, I didn't want Mr. Sanders to sell out a village in order to sell a book. The book was successful on both counts.

Several years ago, Mr. Sanders, his wife, and their 6-year-old daughter moved to rural France for a year in order to write, experience the food and culture, and immerse themselves in the language. They moved to "the Lot", which is an area in the middle of France. Specifically, they lived in Les Arques, an area with a ridiculously small population in the off-season (I can't find it in the text now, but I believe it's only about 50 people in winter). Mr. Sanders does state in the text that his wife is a very private person so there is actually very little about her or their relationship; additionally, there isn't too much about his daughter. No, he focuses on the people of Les Arques and the one restaurant at the center of it all.

Sanders captures the loveliness, the simplicity, the richness, the complexities, and the beauty of village life - there are moments of description that just soar. Likewise, he carefully balances these moments with realistic, poignant descriptions of how village life is dying out, how elderly the permanent population of Les Arques is (the young ones having left for a more urban life, of course). In particular, I found his writing style to be beautifully nuanced and complex - the reader is truly left to do lots of reading between the lines.

Naturally, I loved reading about the food: foie gras, wine, truffles, cheese, farmers' markets. Sanders has these breathtaking descriptions of the texture of foie gras: the delicate texture of it, the small silver dollar size of the servings, the ubiquitousness of it...and then he balances it with a vivid description of going to a small-scale foie gras operation, force-feeding and all. He repeatedly captures the contradictions of life in Les Arques. Additionally, Sanders goes into the kitchen of the restaurant, La Récréation, and describes the insanity of working the summer tourist crowd. Between his descriptions of La Récréation's kitchen, Heat by Bill Buford, and Kitchen Confidential by Anthony Bourdain, I know to the core of my being that I'm not cut out to work in a restaurant kitchen! Read this gorgeous description, though, of the chef (Jacques) in the kitchen:

I watched Jacques melting butter into a sauce, how he held the saucepan tilted so slightly, his little finger elegantly extended as the others grasped the handle of the whisk. He leaned down over the pan, lifting the whisk from time to time to see how the liquid slid from the wire, then putting the sauce back on the stove to come up to temperature before adding each pat of butter.

It's a slow-paced book, but deliberately so. If you're looking for the flashy Anthony Bourdain-style memoir, this is really not for you. But if you want something to slowly meander through while you're curled up in your chair, drinking tea (or wine, in my case), this is just a lovely read.

Note: The only swear word I've ever known in French is "merde" but, according to Sanders, "putain de con!" means "goddammit to hell!" I'm so using that next time I stub my toe in front of the kiddo!
Posted by Unknown at 10.3.08