Back to Basics: Best Ina?

So I'm beginning to suspect that Barefoot Contessa's Back to Basics is the best one yet.  I recently had a failure but, even then, I was able to tweak the recipe and create awesomeness.
The original menu plan was to make the Chive Risotto Cakes with the Parmesan Roasted Broccoli as a side*.  I don't know what the hell I did wrong, but here's how the broccoli turned out: 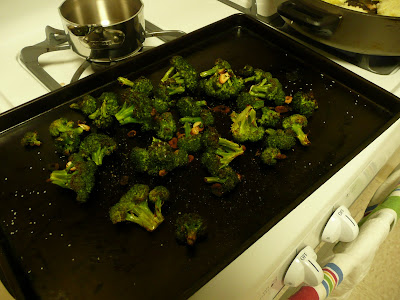 See the brown pieces?  Yeah, that's the garlic.  If you've burned garlic before, you know exactly how rank my kitchen smelled.
As I often do, I halved the recipe so, instead of 4 pounds of broccoli, I used 2 pounds.  But I kept the cooking time the same: 20 minutes at 425 degrees.  I'm not giving up on this recipe but, for the time being, this dish had a date with the trash.  But what to do with the lemon-olive oil-pine nut dressing I had already whisked together for this?
I looked in the fridge and, sure enough, I had salad greens.  So the would-be broccoli dressing became the dressing for a light salad.  Yes!
The Chive Risotto Cakes were friggin sublime.  I had a bit of a problem when it came to coating the cakes with the panko because I hadn't let the mixture refrigerate for 2 hours to overnight like Ina said; instead, I did the holy-crap-I-have-to-refrigerate-this?! thing and stuck the bowl in the freezer for 30 minutes.  But hear me now: Ina's serious.  Refrigerate this properly.
Nevertheless, it turned out okay.  Crispy on the outside, creamy and decadent inside.  The recipe calls for chives in the mixture but, naturally, Kiddo won't touch anything with foreign green thingies in it.  Instead I just sprinkled the chives as garnish for me and Adam.  The results: 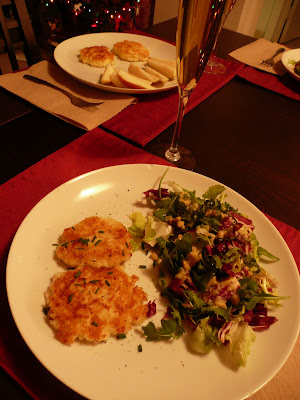 The great news?  We had a ton of leftover cakes so I reheated them the next night (350 degree oven for about 20 minutes) and they were every bit as crispy and creamy as the night before.  The second time around, I added some sour cream on the side for dipping.  I mixed some chives and fresh pepper into me and Adam's - it was phenomenal with the cakes.
All hail, yet again, to Ina!  And I can't recommend Back to Basics enough, particularly if you're just starting out in the kitchen and want to launch right into impressive but deceptively easy-to-make recipes.
Eat, drink, and be a problem solver in the kitchen.
* Okay, librarian friends, I need some copyright help.  I thought that I wasn't able to print a recipe here if I had followed it exactly.  I can only print it if I've altered it and, even then, I still have to give credit to the original source, right?  I haven't been printing any recipes but, sure enough, I look on the blogosphere and bloggers all over have printed Ina's Chive Risotto Cakes recipe.  What's the story on copyright?  And why, as librarians, are we always so obsessed with copyright?
Posted by Unknown at 14.12.08

I've tried to read up on recipes and copyright, and from what I gather, publishers can get copyright protection for entire cookbooks but not recipes.

So, it does seem odd to reprint a recipe, but I think most food bloggers bend over backwards to give credit where it's due.

That's good news - I'll start printing the recipes. I loathed blogging about the meals I was making but not providing the recipes for others to recreate them. On the other hand, the librarian in me knows that dealing with copyright issues is like walking on eggshells sometimes.

And you're right, Rebecca - food bloggers are incredibly respectful of giving credit where credit is due. (And I've added your blog to my Bloglines. That coq au vin recipe looks delectable - I have it bookmarked in my copy of BtoB, but haven't made it yet)

No idea on copyrights, but I just wanted to say that I love your blog! I don't know if Back to Basics is her best yet, but I am enjoying getting to know it!

Ina has never done me wrong. I absolutely LOVED the risotto cakes. I have made it twice since!

Since my copyright knowledge doesn't include recipes, I really don't know. I would hazard a guess though that Rebecca is correct - though as a librarian and scholar, proper attribution would be nice. Plus, some of us food newbs might be more likely to buy one of the cookbooks you love so much if we could see for ourselves how easy a recipe is. It's one thing for YOU to say it's easy! :-)

Thanks for the compliment, CitK! I know, aren't the risotto cakes incredible? And since you boil the risotto like rice, it's soooo easy! I really liked having the sour cream for dipping - I already had the chives on hand this time but, in the future, I'm going to play around with different herbs. Or maybe some sauteed mushrooms on top of the cakes?

Anali, that is definitely why I've been wanting to post the recipes so that newbies can see what's involved beforehand. I hereby decree that I'll include recipes in my blog posts, giving credit where it's due. That will really enrich my food posts.