Many weeks ago, I had dinner out with my friend Jenny.  When she suggested we eat at The Mermaid Inn, I immediately agreed, as I thought the name was about the corniest, most fun, coolest thing ever.  The food was excellent, and I had the enormous pleasure of having my first raw oysters...It's just like everyone has told me: they taste just like the sea.  Which I consider a huge compliment, saying a food tastes just like the place from wence it came. 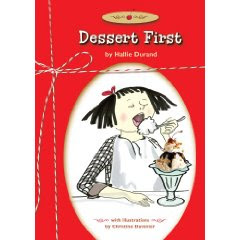 In the course of our conversation, a new children's book came up: Dessert First by Hallie Durand, illustrated by Christine Davenier (S&S, May 2009).  I had read about the publicity package from Fuse #8 so the book was definitely on my radar.  As it turns out, Jenny is friends with the author and was able to hook me  up with a package of my own.  Very sweet, indeed! 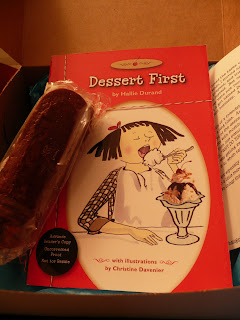 Third-grader Dessert Schneider is part of a food-loving family: her parents own a restaurant called Fondue Paris, which of course serves fondue.  Naturally, Dessert loves all things sweet and chocolate-y.  It is this love for desserts that ultimately gets her in trouble, as she eats her mother's strictly-off-limits Double-Decker Chocolate Bars and has to struggle for redemption.  In the end, of course, Dessert grows up a little, learns a lot, and even gets to enjoy dessert.
It's impossible to read this book and not use the word "sweet."  Dessert, though a troublemaker in the tradition of Ramona and Clementine, has a good heart and spunky spirit.  There are funny parts and, surprisingly, a number of very poignant moments.  Durand definitely gets girls at this age and infuses Dessert with a healthy dose of independence balanced by a desire to do good.  There was one passage that I particularly loved, but I don't feel right sharing it because it's the very last paragraph in the book...and wouldn't that just dull everyone's enjoyment, reading the last morsel before tasting everything that comes before!  So I'll share this part about Dessert's dog, which made me snort-laugh: "Chunky sleeps on my bed.  He weighs 140 pounds, but I always tell him he is light as a feather because he has a great spirit."  Darling.
The food descriptions are also rather nice.  Obviously the fondue one really got me going:

I took my skewer and put a big piece of bread on the end. Then I started rolling it in the fondue. When there was lots of cheese wrapped around my bread I took it out. I blew on it three times and put the whole thing in my mouth.

Makes me salivate...which is a necessary quality in a foodie book, of course!  In addition, there is a scene where Davenier's artwork steals the show: when Dessert wakes up in the middle of the night, the Double-Decker Chocolate Bars are calling to her from the refrigerator.  Davenier - in the ARC, anyway - depicts the refrigerator with swirly letters "Deeeessssserrrrrt" rolling from within, beckoning Dessert to take a late-night bite of the bars.  We've all been there, right?  Hilarious.
That's not to say the book isn't without faults.  It's totally my adult brain working here, but I found it somewhat implausible that Dessert's parents would own a restaurant and spend so much time at home - any adult knows what kind of hours anyone associated with restaurants works.  Now will that bother kids?  Not likely.  On that same note, the restaurant has a French theme, complete with a French chef and pastry chef.  But my research confirms that fondue is Swiss, not French (okay, okay, my research was Wikipedia ).  Additionally, the only two people depicted in the restaurant are Gaston (yes, really) and Dominique...but where are the other restaurant players, particularly those of other ethnic origins?  Because as we are all aware, a large portion of most kitchen staffs is not Caucasian.  Again, do I think kids will notice this?  Definitely not.  I realize I'm being nit-picky.  However, the restaurant plays a major part in the whole book so I just kept noticing this stuff over and over again.
Overall, this was a pleasure to read and the title alone has mass kid appeal for 2nd - 4th graders.  Just put it on display and it'll be snatched up!
Eat, drink, and don't forget dessert!

Other reviews:
Abby (the) Librarian
A Year of Reading
Jean Little Library
Posted by Unknown at 15.4.09

I'm so happy I got to be with you for your first oyster experience! And I'm glad DESSERT made you salivate. I will see you tomorrow!