Spain...On the Road Again (The Book)

Like all good librarians, I check books out from my local library.  Like a bad librarian, I love to write in my books...which is why I am a book buyer.  I dog-ear to mark my place and I love using a highlighter to mark special passages.  And my cookbooks are the worst: they've been dog-eared and highlighted...but I also spill things on them and make all kinds of notes for each recipe I try.  I'd feel bad except that I feel that I'm personalizing my books and, years from now, perhaps my grandchildren will read all my notes and be able to see the passages I loved and it'll make it all more personal.  But what I do with cookbooks is check them out from the library first and try some recipes to see if the book is worth buying.  If I like the test group, then I'll go ahead and buy it so I can start making my notes.
I recently checked out Spain: A Culinary Road Trip by Mario Batali "with Gwyneth Paltrow."  And the first three recipes were a smashing success.
I made the Tortilla Espanola* first, and it was simple beyond belief.  I didn't change a thing from the recipe and, as it suggested, I served it with jamon and a salad for dinner: 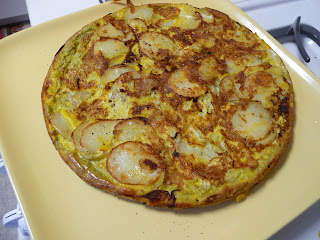 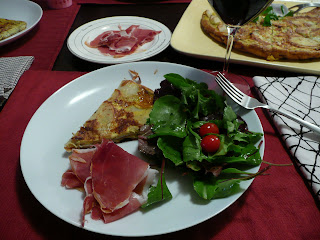 The second dish I made was the empanada.  This one surprised me a bit because I'm used to eating empanadas in restaurants where they come more individually packaged.  This dish confused me as to the difference between calzone and empanada (is it just the difference between Italian and Spanish?).  Either way, the flavor was rich and outstanding.  I halved the recipe for Adam, Bug, and me and it was more than enough for the three of us: I had enough leftovers for two lunches.  And be careful on the cooking time - I cooked it about 27 minutes and it was about 7-9 minutes too long - perhaps because I had halved the recipe.  Anyway, watch the cooking time: 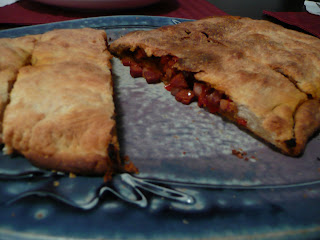 The last dish was the migas, and it was both unique and simple.  The flavor was insane.  I did modify the heck out of this one.  Unfortunately, I don't have photos (my parents were here and I didn't want to be all weird and bloggy about our dinner)...but here is my version of the recipe:
4 c. bread crumbs (I used a baguette)
2 c. panko bread crumbs (I ran out of baguette)
1/3 c. olive oil
6 garlic cloves, not peeled
1/2 lb. Spanish chorizo, casings removed and cut into 1/2-inch dice
1/2 lb. pancetta in one piece, cut into 1/2-inch dice
A large bunch of grapes
4 roasted red peppers, peeled, seeded, and cut into wide strips
Tear up approximately 1/2 a baguette into a food processor.  Process until roughly ground.
Heat the olive oil in a large skillet over med-high heat.  Add the garlic and stir until lightly browned and fragrant, 1-2 minutes.  Add the chorizo and pancetta and cook, stirring, until the meat is lightly browned and starting to render its fat, about 8 minutes.  Add the bread crumbs (baguette and panko), mix thoroughly, and cook, stirring, until the crumbs are lightly browned (the crumbs are going to soak up all the oil and pork fat - I told you it was insane).  Serve with the grapes and roasted peppers (peel the cloves if you like, or let your guests do it...I peeled mine).
The only thing I would change about this one is I would double the garlic.  Seriously.  The garlic ends up getting roasted in its skin so it's incredibly soft and sweet.  It takes each bite to the next level and we all ended up fighting over the measly 6 cloves in the recipe.
So this makes it official: this cookbook is a buyer!  I'm looking forward to writing notes in the margins for posterity!
Eat, drink, and be okay with owning a book by Gwyneth Paltrow.
* Apologies for my lack of proper accents on the Spanish words.  Does anyone know how to do this on Blogger?  Normally I just import from Google Docs, but...
Posted by Unknown at 6.4.09

This may not be the answer you were looking for, but if you hold down your Alt key (not sure what key that is on a Mac? I use a Mac, but my keyboard is PC) and then hit all the different letter keys, you'll see that it types lots of different symbols and accents. Then, in the case of the accents, you just let go of the Alt key and press whatever letter you want to fit under your accent, and voila! It appears. So, for example, I'm guessing maybe espanola should be española? (Is that the right tilda?) I hit Alt + n to get the tilda, then n again, and the result was: ñ. For ´ it's Alt = e, for ¨ Alt + u, for ˆAlt + i, etc. Play around and you can find all sorts of fun symbols / Greek letters, too. œ∑®†øπåß∂ƒ :o)

Yours geekily, and hoping this helps,
Kristin

Dude, I love the mental image of you "getting all bloggy". :o)

P.S. Dude, the author of Graceling comments on your blog. You are officially my super famous friend.

It is funny that you made the Spanish tortilla as I was just looking up recipes and trying to decide what to make at Easter. I am doing more of a side dish or appetizer to bring to my sister's house. And I am debating between this dish (which I have never done) and a different sort of cheese fondue I just read in Bon Appetit. How did you like your Tortilla??

Oh and the keyboard thing:


hold option and type a then type vowel = å