So when I got invited to dinner with Chris Bradford, I knew I was going to have to read his book.  Little did I know it was about samurai.  Again, I don't "do samurai" and ninjas and the like...though I guess I kinda do since I'm in love with Wink!: The Ninja Who Wanted to Be Noticed by JC Phillips (Viking).  Nevertheless, Bradford's book Young Samurai: The Way of the Warrior (Hyperion) is a 359-page tome.  So I was sort of grumbly about delving into it.
I can't tell you how happy I am to report that I was wrong about this one as well.  Apparently, I do samurai now.  The story is action-packed and compulsively readable.  And kids will unwittingly learn a thing or two about historical Japanese culture.  12-year-old Jack Fletcher is on a ship heading for "the Japans" when it is attacked by nefarious ninjas.  Everyone save Jack is killed, including his father, by Dragon-Eye and his band of killers.  Jack is rescued by a samurai, Masamoto, and brought back to health by Masamoto's family.  They adopt him and Jack learns the way of the warrior because 1) he has no choice, and 2) he wants to avenge his father and take on Dragon-Eye.  Of course, Jack learns along the way and many themes are explored: honor, trust, friendship, truth, family.
It would be really easy to say this is a "boy book" but that's undeservedly pigeonholing the story.  Being brought up in England more than a hundred years ago, Jack is shocked to learn that Japanese girls train as samurai as well, and there is plenty of girls-kick-ass action.  Each character is very strong and not one of them seems one-note or flat.  In particular, I really enjoyed Jack, and Bradford excels at making him a real 12-year-old boy.  He's stubborn and headstrong, but he's also confused and scared.  He cries, and he's homesick...but he also wants to make his father proud and show respect to his adopted family.  It all has an up-and-down nature to it, which is spot-on for the age.  And the reader never doubts whether Jack will succeed in the end.  Of course he will.
Frankly, there is little to criticize here.  This is Bradford's first book and, as expected, there is sometimes a self-consciousness in the writing.  Sometimes he's telling too much and not showing.  Additionally, it's very clear that Bradford is passionate about the Japanese culture and the martial arts - he is a black belt himself.  While this makes for a truly authentic storytelling experience, all the details sometimes slow some of the action.  But I assure you that these are quibbles - overall, it's a stellar reading experience.  And lucky for all of us, the book has an open ending so let's hope there's more to come.
As for the dinner with the author I mentioned earlier, it was fittingly an action-packed night.  We dined at Japonais and the food was excellent.  I actually ordered chicken for a main dish - I don't know what possessed me, but I believe it was the chestnut sauce that came with it.  Lucky for me, it was rather good, if a bit on the dry side.  Chris Bradford is one of the nicest authors I've met to date; he's super-friendly and talkative, and he just seemed flattered that we were all there and very interested in what he had to say.  His story about proposing to his wife in Cuba was priceless.  The best part was that he brought his samurai sword!  We weren't too sure that the restaurant would be keen on him pulling out a sword so the ten or so of us gathered all around Chris, forming a bit of a wall.  Then he pulled the sword about halfway out of its sheath and showed us all its parts.  It was incredibly beautiful.  I think it can also be said that, if Betsy were still doing her Hot Men of Children's Literature, Chris would make the list.  Who doesn't go soft when hearing a British accent?

Don't think you "do samurai"?  Well, start with Young Samurai: Way of the Warrior.  It could change your mind.
Notes on the cover:
The book came out in the UK more than a year ago, and here's their cover: 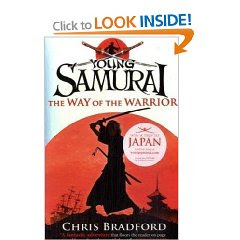 I'm more drawn to our cover.  However, I can't show it to you, but on the back of the American cover is this great illustration of Jack.  He's depicted full-body with his samurai sword and he's looking down.  I think this would have been a better front cover because it would have pulled in all those kids that don't think they like samurai stories.  The front cover is very imposing and I think the art on the back cover is more intriguing.  But that's me...
Posted by Unknown at 26.4.09

It was so great to meet you at the dinner, Laura. I'm glad you enjoyed the book, and hope to bump into you soon in the neighborhood.

Thanks for the wonderful feedback on my book. It's great you enjoyed the story so much. I am very flattered.

Book 2: The Way of the Sword will be with you next year in the States. More action, more excitement and more Akiko (she's up to some mysterious things...).

Thanks for rubbing my ego by your suggestion of putting me on Betsy's list - I have the subdued dark lighting in the restaurant to thank for that!

Hope the cooking is going well. See you again soon I hope.

p.s Can I remind all you lovely librarians that there is a free Teachers' Guide to Young Samurai on the home page of www.youngsamurai.com.