So about two weeks ago, I lost a bet to the lovely wife. You don’t even want to know what it was about but, suffice to say, the correct answer was White Men Can’t Jump, not Rush Hour. Damn it! I hate to lose.

What were the stakes, you say? It was a week’s worth of dinners prepared entirely by yours truly. Now for those of you who have not looked at a calendar in awhile, let me refresh your memory: that is seven (not necessarily in a row, given the fact that our family is busier than a one-legged man in an ass-kicking contest and the thought that we would all be together for dinner for seven nights in a row is….laughable). Now when I say entirely, that is a bit of an understatement. Turns out that this little adverb means oh so much!

What I was most surprised to find is that the cooking part was easy! Well, maybe not easy, but certainly do-able. They make directions for that piece. What I found to be the most challenging was deciding on dishes, finding quality ingredients, and having everything come together on the same day!

So let’s see, what should I do for the first meal? Something snazzy to impress the foodie wife…hmmmm…let’s see…maybe something she has never had before…maybe…ahhhhh…yessss…RABBIT! So the first meal up was Rabbit Armando by Mario Batali or as I liked to call it, Thumper and Shrooms.

The trick with this meal was splitting the effort over two nights. Turns out the little fella needs to marinate overnight in a bowl of goodness: pancetta, balsamic, porcinis, and spices. So Night One was mostly chopping and slicing. However, butchering the rabbit was included in this knife-laden evening. Have you ever ordered a whole rabbit? There is a reason the word “whole” is in the title.

After 24 hours of soaking up the good stuff in the fridge, Thumper was ready for the heat. Along with a little wine to ease his pain, he simmered away while I worked a little novice magic on some mashed potatoes. A little roasted garlic, some browned butter, and a fist full of oregano made these babies sah-weet.

At the end I followed Anthony Bourdain’s advice in Kitchen Confidential: I piled it high, speared it with a little sprig of oregano and called it a meal.

Damn! I can cook! Feast your eyes on this gem. 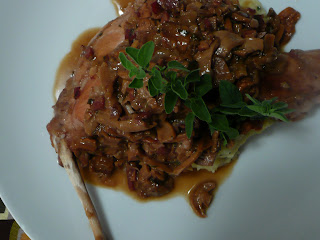 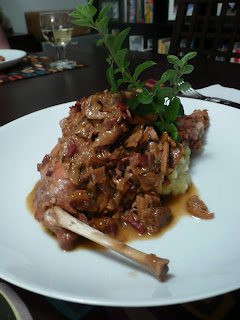 I hope to be back later for other guest spots in the blogosphere, so tell your friends!

Eat, Drink, and don't bet against your wife.

While I normally consider myself an unashamed omnivore, rabbit is one of those meats I just can't eat. I think it's because my grandfather used to raise them when I was little - and of course I'd play with them and name them when I would visit. They served up one of my lil buddies one night for dinner. I'll never forget it.