A phoenix rising from the ashes

So here were the ashes last night: 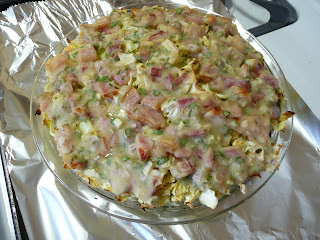 This pathetic mess is the Cabbage Galette recipe from My French Kitchen by Joanne Harris and Fran Warde. Based on the photo in the book, I expected soft green cabbage and a golden crust. So I kept looking through the window of the oven, wondering what the hell was going on. Then I realized: CRAP! I forgot to add two eggs to the crust mixture!!!! No wonder I didn't have enough to cover the top of the galette! No wonder I wasn't getting a golden crust! But with only 10 minutes left on the timer, I decided to keep it in the oven. When time was up, I took it out and noticed the cabbage was still raw and crunchy. Wha...?!?! I checked the recipe... CRAP! I forgot to blanche the cabbage first! It was just SO BAD that I laughed and told the husband to just dump it. Wanna hear why this happened? Because I was actually home by myself when I was making it versus the usual mid-week madness of my kiddo's homework and a schedule to stick to. I actually had time. So I leisurely prepared it, drinking wine and singing along to music. I got lazy. I wasn't vigilant. And this is what happens. I always knew I worked better under pressure but I learned last night just how true that is.

And here's the phoenix: 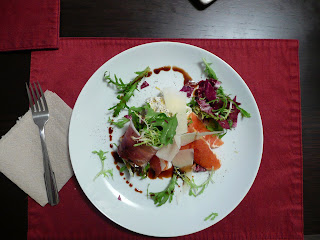 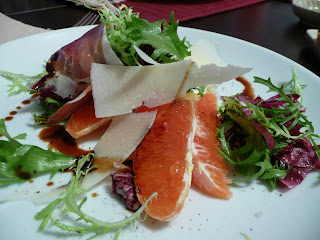 Instead I made the dinner I originally had planned for this evening: Jamie Oliver's Fifteen Christmas Salad. It was the first time I had made it (also the first time I tried the Cabbage Galette), and I can't even express to you how simple it is, yet how rich it is in flavor. First you start off with the mozzarella di bufala, which is on the bottom, and you sprinkle salt, pepper, and freshly grated lemon zest on it (Layer 1). Then the recipe calls for clementine slices next, but I used peeled cara cara oranges (Layer 2). Then you dress some salad greens in lemon-oil dressing and wrap them in some speck (smoked proscuitto, Layer 3). Then the recipe calls for shaved Parmigiano Reggiano on top, but I used pecorino romano, which didn't work so well - use Parmigiano Reggiano like Jamie says (Layer 4). Last, finish with a sprinkling of aged balsamic vinegar (Layer 5). It was textured, rich, and simple. It tasted decadent but was still surprisingly light on its feet. And it paired splendidly with the Bridlewood Viognier I had already poured. The best part? It took me about 20 minutes to pull together after my cabbage galette debacle.

it's beautiful, but weren't you still hungry after you ate it? looks like a first course to me...

Well the salad looks amazing! And it would be just the perfect size and perfect ingredients for any meal for me. How does your husband feel about it? Many men would think it too small I fear.

Definitely not hungry afterward. I think the photos are very misleading - under the salad and oranges was half of a very large ball of buffalo mozzarella. Then there was half an orange for both of us and the salad was wrapped in two pieces of speck for each of us. Additionally, I'm a firm believer that if you have food with interesting flavors, colors, and textures, and you eat it slowly and savor it, you'll find that you're satisfied much more than if you had a larger portion and wolfed it down. Lastly, we also had some slices of baguette with dipping oil that we munched on while I was trying to salvage the meal - so we had snacked a bit ahead of time. However, if we had guests over, I would have served this as a first course - we eat much lighter when it's "just us."

Nicole, my husband loves this sort of thing and never complains about portion size - I'm a lucky gal. Generally, after a light meal like this, he will have a small snack a couple hours later.